Feuds, fashion and fame, a history of Henley firm 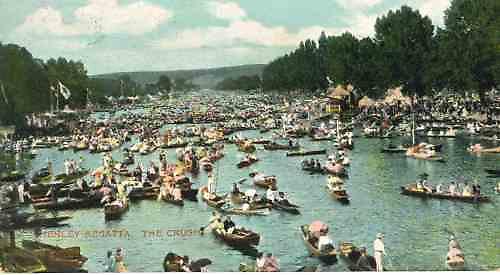 HOBBS of Henley celebrates its 150th anniversary this year. A new book uncovers the boating firm’s intriguing history. Here, the author SIMON WENHAM recounts some of the more unusual events to have happened over the years.

IT all started when Harry Hobbs took over the Ship pub in Wharfe Lane, although the family’s involvement with the river goes back to at least 1621.

The earlier date was a long time before even the Brakspear family were brewing in Henley, when the waterways were thriving arteries of trade and the area was well known for its timber, malt and corn, much of which was transported by barge.

Harry was quite a character, whose fondness for home-brewed gin was the inspiration for the Mr Hobbs’ gin, which the company launched in 2017.

On one occasion in 1875 a policeman entered the pub suspecting that alcohol was being served before the licensing hour. A sudden flash in the fire suggested a drink had quickly been thrown on it but the occupants claimed they were only drinking tea.

One of Harry’s sons was clearly hiding something behind his back, however, and was forced to reveal a drink measure with the remnants of gin in it. Harry got away with it by claiming he had not sold it.

Many colourful characters from the town’s wharf frequented the pub. In 1886 a “rumpus” broke out between four bargemen and one of them, who used “some very bad expressions”, received a black eye, which he (unsuccessfully) claimed was caused by Harry.

The publican could clearly handle himself and, on another occasion, he caught a thief and marched him by the collar to the police.

The Hobbs family’s association with drink continued in 1917, when Harry’s sons, Bill and Arthur, took over the Red Lion Hotel. Arthur was brought before the authorities for serving beer above the legal price, which was embarrassing for his brother, who was both a magistrate and mayor of Henley.

Working on the river was dangerous. In 1840 there was a drowning at the Angel pub, which was then run by John Hobbs, a distant relative of Harry, when his son Henry died in a sailing accident. Five years later, the new landlord Henry Rogerson died when a boat he was bringing back from Windsor capsized.

Although two customers died after falling from canoes in the early 20th century, the firm has saved numerous lives. In 1904, a horse that was being watered got out of its depth and drowned, forcing the driver of the cart to throw his young son towards the bank, where he was fished out by Ernest Hobbs. A more amusing rescue in 1933 involved rowing champion Dennis Guye, who had invoked the wrath of a swan. The oarsman was knocked into the water by the cob and had to shelter behind the boat until help arrived.

The company has also had to intervene a number of times when boat engines have exploded or cars have gone into the river.

The landscape in Henley changed considerably over the decades. The town became a fashionable riverside resort in the Victorian period, aided by the construction of the railway station in 1857 and the growing reputation of Henley Royal Regatta, which was first held in 1839 and became so popular that in 1902 a local pumping station dealt with 200,000 gallons of sewage in 24 hours.

The river was also widely used for swimming. On one bank holiday weekend in 1933 more than 2,500 people — the equivalent of 40 per cent of Henley’s then population — flocked to the town’s bathing area.

There was even a dispute about appropriate clothing as the fashion had changed from the more formal swimwear of the Victorian era to one of wearing “as little as possible”.

Pleasure boating was also popular and by the end of the 19th century, 12 Thames businesses operated in Henley. Hobbs relocated to its current site in Station Road in 1898 and expansion to Shiplake, Goring and Pangbourne ensured it could store more than 1,000 boats. The firm added new services, from boatbuilding and slipway services to cabin cruiser hire and a chandlery.

The regatta was the most important annual event as lots of craft were rented out. Hobbs also supplied many of the iconic umpire launches as well as constructing the course itself from 1919 to 1988.

More recently, the firm has
remodelled itself into a hospitality company. In 1980 it launched passenger services and this has developed so that Hobbs now offers entertainment on craft like its £500,000 flagship vessel, The New Orleans, as well as providing an exclusive rental experience in the form of the Henley Boat Club.

Hundreds of thousands of people from all walks of life have travelled in Hobbs’ boats, including many celebrities. During the regatta, members of the royal family, including the Queen, have travelled on the umpire launches.

Other clients have included prominent rowers, such as Sir Steve Redgrave, now the regatta chairman, and members of Led Zeppelin, who rented out a property in Pangbourne.

Barbra Streisand, George Harrison, Oliver Reed, Dame Maggie Smith and Gene Kelly were among the many who had private cruises and Charlton Heston played poker on a cabin cruiser. There was even an unexpected visit from Sir Michael Caine, who asked for help to find his grandson.

Bill Hobbs (1863-1945) started a tradition of public service that made many members of the family key figures in Henley. He not only became superintendent of the fire brigade and quarter-master-sergeant in the volunteer army but was also asked to join the town council. At the outbreak of the First World War, he resigned as Mayor of Henley to fight in the conflict, despite being in his fifties.

His son, Dick, and two grandchildren, Margaret Day and David Walden, followed in his footsteps by becoming mayor.

The tradition of civic work has been continued by current family members Tony Hobbs and Jonathan Hobbs with the former receiving the town medal and an MBE for his services to Henley. Both have also been made Royal Watermen to the HM Queen, as has long-standing Hobbs employee Colin Hinton.

The Hobbs did not always get along, however. There was a brief period in the mid-20th century when one side of the family set up a rival Henley business, which put a strain on relationships.

But this was not as bad as it was with other local competitors. In 1931, Henry Hooper took George, his own brother, to court over royalties from their jointly inherited boat business, while the Parrot family, another Thames dynasty, even came to blows. Brothers Walter and Alfred fell out with each other and one altercation led to Alfred junior throttling his own uncle.

Few boat operators survived the test of time but Hobbs of Henley, a business founded on the two core industries of the town (beer and boats), diversified to survive. It is right to celebrate its considerable legacy and the contribution of a dedicated workforce, many of whom loved working on the water.

If you are involved with local charitable causes, participate in key events, use facilities like Mill Meadows or the town hall, or simply appreciate the beauty of the famous riverside vista, you can be confident that a member of the Hobbs family has had something to do with it. It is no wonder that they not only became one of the most notable families associated with the River Thames but their business is synonymous with the regatta town.

• Hobbs of Henley: a History by Simon Wenham is published by Amberley Press (£14.99).