Basil the cat’s back, but not for long 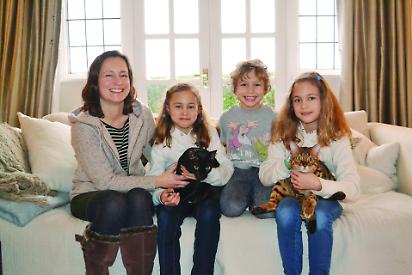 A CAT has been reunited with his owners more than three years after going missing.

But Basil, a seven-year-old Egyptian , has already had to be rehomed with other members of the family because they had bought two new cats.

He was fit and healthy, if a little fatter, after being discovered about 12 miles away from Sam and Alistair Todd’s home in Ferry Lane, Mill End.

The couple, who have three children, had given up hope of ever seeing their pet again when he vanished in September 2013.

After the family moved from Medmenham the previous year, Basil would sometimes go missing for two days and on one occasion even returned to their old home so they had to go and fetch him.

Neighbours would often find the cat in their spare bedrooms.

When the family had not been seen him for three days, Mrs Todd became worried and put up signs around Hambleden appealing for sightings. She said: “Basil was always a wanderer and would disappear for a few days at a time but always come back.

“This time it had been three days so I checked all the sheds and people’s gardens and put posters up in the post office and bus stops.

“I never heard anything so it seemed he had had an accident or something had happened to him.

“I would be driving thinking the worst and that I would find him on the road. My worst fear was he was in a shed and needed help.”

Then last month Mrs Todd was cooking the family dinner when she got a call from Chiltern Cat Protection to tell her Basil had been found and traced back to them thanks to his microchip. 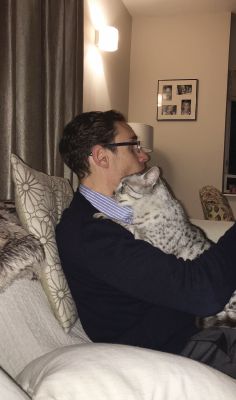 Mrs Todd, 39, said: “My husband always said he thought he was alive and would turn up but I had feared the worst. When I got the call I was shocked because it was like him coming back from the dead.

“If it had happened in the first year it would have been much more expected but it being so many years after it was a real surprise.”

The call came from Diane Ratcliffe, a volunteer with the rescue charity, who had found Basil in Sydenham, near Chinnor, after being contacted about a possible stray.

She said: “I had a call from a lady telling me about what she thought was a tomcat. Another neighbour was feeding him but she did not want to keep him.

“I went to pick him up and he was very friendly. I took him home and kept him in my spare room.

“He was in very, very good condition and was very healthy. I would not be surprised if he had had two or three homes and was sleeping between them rather than being a stray.”

Mrs Ratcliffe, who lives in Aylesbury, arranged to meet Mrs Todd in High Wycombe to reunite her with Basil.

Mrs Todd, a teaching assistant at Trinity School in Henley, said: “When I approached her car I didn’t really know what to think. I was nervous because I thought Basil might not recognise me.

“I instantly knew it was him because there was a little mark on his right ear that he has always had. It was obvious it was him.

“He rubbed his face against my hand and seemed really glad to see me. Basil was in fantastic condition, apart from having a few fleas.

“He had been obviously living somewhere. If he had been living outside he would have looked like it. Someone was feeding him and looking after him.”

Mrs Todd took Basil to see a vet, who confirmed he was and then brought him home. She said: “It was surreal bringing him back. He walked sniffing things and then he got on the spot on the sofa where he used to sleep.

“He also ran straight for the food bowl — he knew where it was.”

When her children, twins Ellie and Amelia, 10, and seven-year-old Josh, returned from their day at Danesfield School they dropped their bags and ran indoors to see Basil.

Mrs Todd said: “They were excited because they knew he would be there when they got home. The girls, being older, had memories of him. They were quite emotional and wanted to stroke him.”

Ellie said: “We were so excited we came running into the house.”

Amelia added: “It left me speechless when he came back.”

But Basil would only spend one night in his old home as the family had bought two new cats, Bengals called Pumpkin and Cobweb, at Halloween in 2015.

Mrs Todd said: “We grieved for Basil but after about two years we decided to get another because the children had loved having a cat. We waited a long time because we thought he might still come back.

“We decided our new cats would be house cats. They do escape occasionally but what happened has affected how we look after them.

“It has made us nervous and the new way we look after them is much more protective.”

Meanwhile, Basil has gone to live with Mrs Todd’s parents in Chichester, West Sussex, where he has settled down.

She said: “My mother loves cats but didn’t have any. What was funny was I had seen a similar cat turn up in Henley and my mother said it could be Basil and that I should check.

“I told her not to be ridiculous as it had been years but she asked if Basil did turn up could she have him. Then when he did turn up she said she would be thrilled to have him.

“It was such an unexpected gift and we already had our two and my mother already had Basil for holidays. Now he’s really happy and my parents love him.” 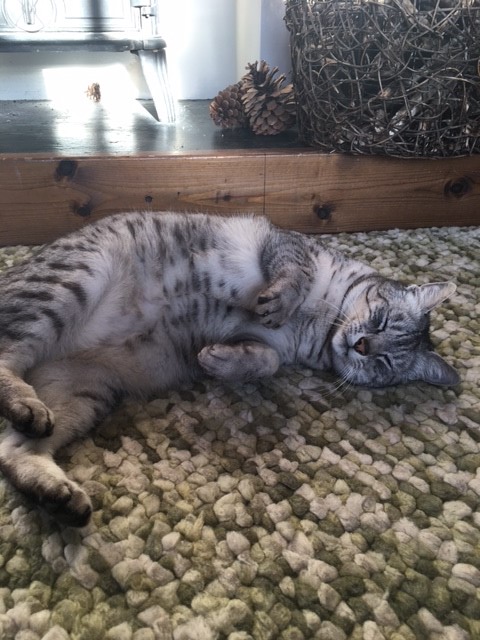