Hail our young achievers in sport, arts and citizenship 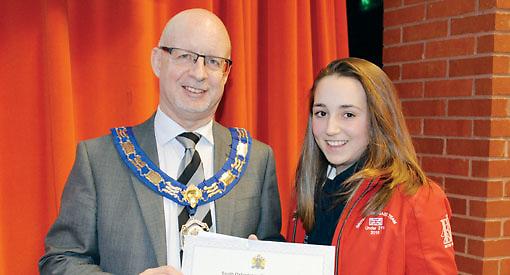 TEENAGE triplets who hope to ski for England were among 19 youngsters from the Henley area to receive cash awards for their accomplishments. 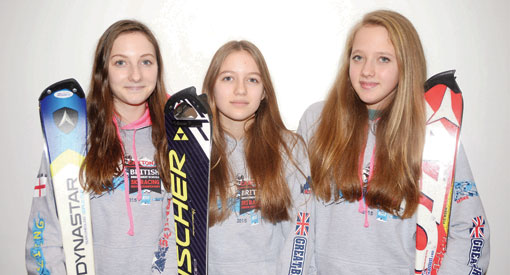 The scheme, now in its 13th year, celebrates excellence in sport, the arts and citizenship by 11- to 18-year-olds from across the district. All the youngsters receive the same amount.

A total of 46 awards was presented by Councillor Paul Harrison, the council’s chairman, and vice-chairwoman Councillor Jeanette Matelot.

Cllr Harrison told the winners: “I have always been amazed by the quality of the young people receiving these awards.

“The level of commitment, dedication and character you show is an inspiration to the rest of society and should hold you in good stead for your future endeavours.

“I am pleased to see so many parents, grandparents, family and friends here to support you.

“I’m sure everyone would agree their support goes much further than coming to an event like this. It is also taking you to classes, washing kit, cheering you on and helping you through the tough times.”

The 15-year-old Hawkins girls, who live in Rotherfield Greys with their parents Nigel and Nicole, have twice been chosen for the England schools senior ski squad after winning silver at the national championships in 2015 and again last year.

They hope to represent England at the International School Federation’s biennial world skiing championships in 2018.

The girls were also part of a Gillotts team that came fourth in the 2016 National Schools Ski Championship finals.

They were introduced to the sport by their father when they were three and began learning regularly during a year spent living in Canada when they were eight.

Danielle said: “We’re really happy to have won as it feels like we’re giving something back to our parents. Skiing clearly isn’t a cheap sport and they’ve put so much into it, which we’re really grateful for.”

Mrs Hawkins said: “I’m really proud of them. Skiing has helped them so much in every area of life, especially with things like teamwork.

“When we go on holiday together it’s wonderful to see how far they’ve come. They look incredible on the slope and can hold their own with much older skiers.” 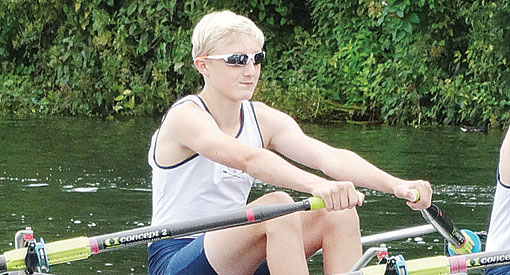 Brothers EUAN AND BRUCE TURNELL, of Greys Road, Henley, were rewarded for their achievements in rowing.

Bruce, 16, who also received the award in 2015, won the junior 16 single sculls at last year’s Henley Town and Visitors’ Regatta and was in the top three at the Reading Amateur and Wallingford regattas. He is now having trials for the GB junior rowing team.

Euan attends Gillotts while Bruce, a former Gillotts pupil, is now at The Henley College.

The pair were encouraged to take up the sport in 2012 by their mother Helen, who rows for Henley Rowing Club and has enjoyed the sport since her student days at the University of Salford.

She said: “They’re doing extremely well in terms of their achievements on the water and the support they get from the club and its coaches just tremendous.

“I’m really proud that they’ve won the award. It’s great recognition both for them individually and for the club.”

The 16-year-old, of Brocks Way, Lower Shiplake, qualified for the world championships in Korea last summer, where she and her teammates were placed 11th, then claimed titles for her trio at the British championships.

She previously won the award in 2014, a year after qualifying for the GB aerobic gymnastics squad, and won gold at the Welsh Open Aerobic Championships.

Last year she won gold in the women’s junior eights at the Junior Inter-Regional Regatta and the women’s under-16 at Henley Women’s Regatta.

The teenager, from Pishill, also won silver in the coxless fours at the British junior championships.

Sisters CHARLOTTE AND EMILY WILLIAMS, who live with their parents, Annie and Michael, in Baskerville Road, Sonning Common, were honoured for their achievements in fencing and volunteering respectively.

Charlotte is to compete at this year’s British Youth Championships in Sheffield after winning the Berkshire, Buckinghamshire and Oxfordshire championship in 2015 and 2016. She also won last year’s southern regional championships and is ranked 21st in her age group nationally.

The 16-year-old took up the sport as part of her Duke of Edinburgh’s bronze award five years ago, when she was a pupil at Chiltern Edge School in Sonning Common. She and her sister now both attend Kendrick School in Reading.

Emily, 15, has been supporting the 1st Sonning Common beavers since September 2015 and regularly leads activities for groups of up to 23 children.

She also took this up as part of the Duke of Edinburgh’s bronze award and, although she only had to volunteer for three months, she stayed on because she enjoyed it.

Mrs Williams said: “I think Charlotte is quietly both confident and competitive so the sport represented an opportunity to express that side of herself.

“Emily loves the volunteering — she always tells us what she’s been up to each week and finds it so rewarding to see the children develop. We’re very proud of them both.” 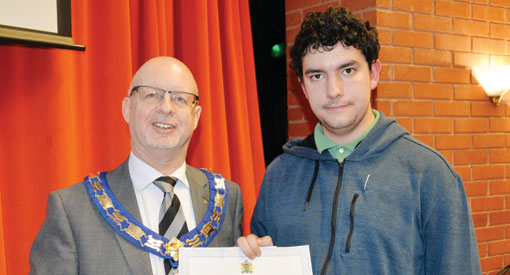 Last summer he started helping at Club SC, a youth club based at Chiltern Edge School, where he runs the tuck shop and organises games and activities.

Charlie, a pupil at Gillotts School, attended the club when he was younger and joined at the suggestion of another volunteer.

He previously volunteered at the Helen and Douglas House hospice near Oxford, which his brother Dylan, 10, attends as he suffers from the rare neuromuscular disease mitochondrial myopathy.

When Charlie finishes his studies he hopes to secure a paid job with the charity.

His mother Annabelle said: “He’s a very caring person and really enjoys volunteering. He sees himself as something of a role model — not in a big-headed way but just as an approachable and helpful figure for younger children in the community. He knows how important it is for kids to have someone to look up to. We’re proud of everything he has done and glad he has won the award as he deserves to be recognised.” 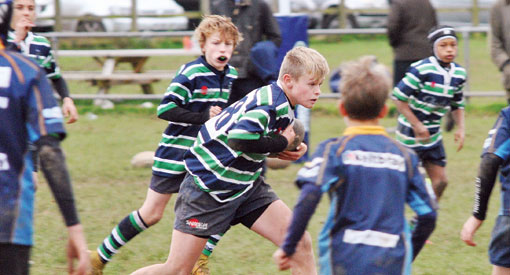 He has played for Reading Abbey RFC since the age of six, when he joined its mini-rugby and is now consistently selected for its A team.

Last year he secured a place on the London Irish and Berkshire County under-13 academy programme after passing several trials. The 13-year-old, who attends Chiltern Edge School, also plays for Rotherfield United Football Club’s under-13 colts.

His father Ian said: “Lachlan really enjoys the academy programme as it’s a great opportunity to take his skills to the next level.

“He has also found a great social network through the sport, which I think is important — he has a lovely group of friends from different schools in the Henley area.

“He has worked really hard to reach this level and we’re very proud of him.” 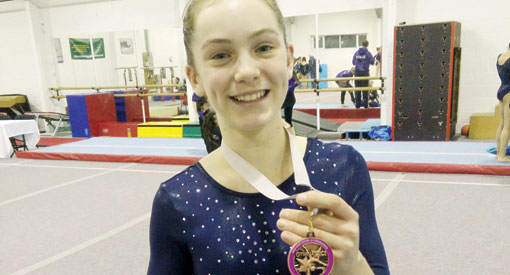 The 14-year-old Chiltern Edge pupil joined Kennylands Gymnastics of Sonning Common, then known as Thames Valley when she was five and now coaches its junior gymnasts twice a week. Her older brother Adam, 17, who plays for Woodcote/Stoke Row Football Club, has previously won a young achiever award.

Her mother Christina said: “Ellen was identified as one of the stronger pupils soon after she started classes. She’s among the youngest in her age group so she’s done exceptionally well as she’s always up against older and bigger girls. She loves throwing herself around as she has very good core strength though she’s not too keen on the more dance-based aspects. She once attended a ballet class and said she was never going back because the teacher tried to make her perform some moves!

“She’s very proud to have won this award and it’s great that she’s excelled in her own right after her brother won one.” 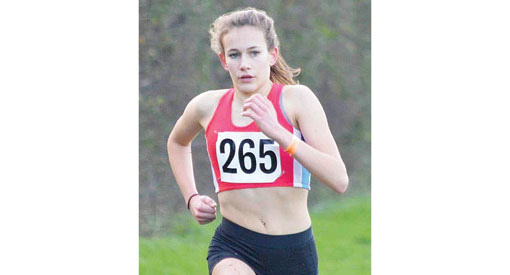 NANCIE BOWLEY, who goes to Gillotts, picked up her second award for achievements in endurance athletics.

She has been a member of Reading Athletics Club since she was nine and holds its current record in the 1,500m steeplechase with a time that put her 22nd in the UK.

She also won the 1,500m in her age group at this year’s Berkshire, Buckinghamshire and Oxfordshire schools championships and came eighth in the national championships.

The 16-year-old discovered a talent for running while a pupil at Sacred Heart Catholic Primary School in Henley and was encouraged to pursue it by headteacher Karen Edwards.

Her mother Lucie said: “She enjoys the competition and also just likes running for its own sake.

“I think it’s one of those sports you either love or hate. It’s hard work and a big commitment so we’re very proud that she’s kept it up into her teenage years.

“It’s not easy fitting it around her GCSE work but she’s pretty focused.

“It’s brilliant that she won another award and I’m happy for all the winners. I think it’s important for young people’s contributions to be recognised, whether that’s in sport or something else.” 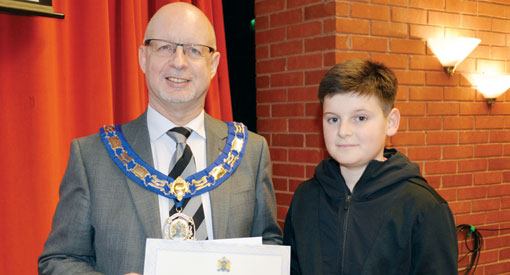 WILLIAM BEVILLE, from Gallowstree Common, was honoured for accomplishment in football.

He was recently signed to the Oxford United academy’s under-13s squad, where coaches say he has “shown impressive skills and awareness technically and tactically”.

The 13-year-old started playing for Rotherfield United FC when he was six and he has been approached by talent scouts from Chelsea, Reading and Wycombe Wanderers.

He was signed to Wycombe’s academy programme when he was nine but when that folded he moved to Brentford for four years before switching to Oxford.

He now also plays for the Vale of White Horse district squad and hopes to play at county level soon.

His mother Helen said: “He’s had to give up a lot of sleepovers and parties with friends because he trains three times a week and plays matches in towns as far away as Plymouth on Sundays.

“He has a great work ethic and even trains in the garden in his spare time so this is well deserved.”

LOTTIE ORR, who rows for Henley Rowing Club, picked up her second award after winning for the first time in 2015.

The 17-year-old from Checkendon was in the junior women’s quadruple scull that won at last year’s Henley Women’s Regatta and the Fours Head of the River race in London and also won gold at the Coupe de la Jeunesse international regatta in Poznan, Poland, as part of a GB double scull.

Lottie is studying for her A-levels at the Abbey School in Reading and hopes to go to university in America next year. 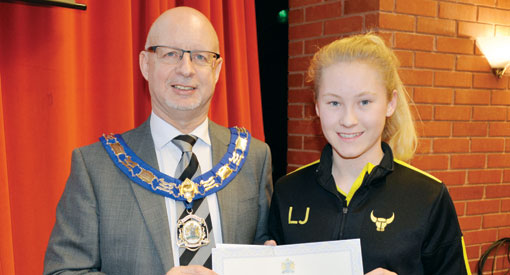 LOIS JOSLYN, from Goring, won an award after securing a contract with Oxford United women’s football club, where she is captain of its under-14s squad.

This season she was picked to attend one of the FA’s regional excellence camps to help young elite players fulfil their potential.

Synchronised swimmer LOTTIE MOGHUL, from Whitchurch Hill, was honoured for winning gold as part of an eight-strong team that competed in last year’s South-East multi-regional and national age group competitions.

She is ranked in the top 20 nationally for her age.

She also rides for the British Dressage prime squad and qualified for last year’s winter national championships at and medium level, ranking in the top eight in both classes.

LILY CLIFTON, from Woodcote, won her second arts award for achievements in dance.

She recently competed at the World Tap Championships, where she won gold medals for production and formation and in the past year she has been placed first at several national championships.