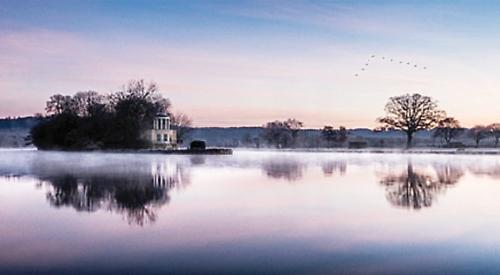 A PROPERTY developer from Lower Shiplake has been named runner-up in a photography competition.

Oli Anderson’s picture of a frosty Temple Island taken at sunrise earned him a £250 voucher for House of Fraser.

The prize also included a £500 charitable donation, for which he nominated Harpsden Pre-School, which his nephews attended.

Romans estate agents, which has a branch in Hart Street, Henley, launched the competition in June as a way of showcasing the best the area has to offer.

Anderson, 36, says the picture was the result of his girlfriend, Annabella, persuading him to get up early and go for a walk with her.

He said: “My girlfriend and I got up at , parked up by Bremont and walked down the river to Temple Island and waited for the sun to come up. The picture was taken during the last cold snap — the car thermometer said -8c, but it was well worth it.”

Anderson captured the image using a Sony A7R Mark II camera on a tripod and said it was probably only the third photograph he had taken with it.

He sent the picture to the Henley Standard and it was published on the letters page. It later appeared in the Daily Telegraph as part of its monthly travel competition.

When Romans launched the competition Annabella encouraged him to submit the photograph, which carried the caption “Temple Island on a chilly winter’s morning”.

The competition was won by Mick Vogel with a photo called “Poppy field at Widbrook Common” taken in Cookham, while Paul Williams came third with “Horseshoe Golden Sunset” taken near Yateley.

The online winner, with 1,038 votes, was Lizzie Barry with an image of a path leading through Ockwells Park in Maidenhead called “Walking around always captures the imagination and takes you away from everyday life”.

Richard Wagstaff, manager at Romans Henley, said: “The judges had to make some very tough decisions to in order to pick the top three — they were extremely ruthless but in the end were very happy with the winners.

“The winning photos are all very different yet they all highlight the beauty of the area. We are really lucky to live in such a stunning area, with a great mixture of urban districts and rural woodland, as demonstrated by our four winners.”

You can view the winning photos and the rest of the entries at romans.co.uk/thelocalpicture