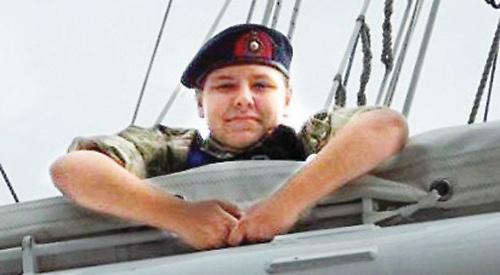 TWO Henley sea cadets have spoken of their pride at being part of a crew that won a 1,460-mile sailing challenge around the Baltic Sea.

Sophia Stevens and Charles Washbourn, both 15, were among 24 youngsters from cadet groups around Britain who took part in the 61st annual Tall Ships Race.

The pair, who both attend Gillotts School in Henley, were up against more than 80 other crews of all ages, abilities and nationalities and didn’t know they had won until they returned to London.

Sophia, who lives in Leaver Road with her parents Graham Scales and Louise Lewington and sister Zelina, nine, took part in the last two of the race’s three stages. She was joined for the return journey by Charles, who also lives in the town.

It was a significant achievement for Sophia as she has recently recovered from a severe form of chronic insomnia which meant she had to take a lot of time off school.

Her crewmates sailed the first and longest leg of the race from Halmstad in Sweden to Kotka in Finland, which they won, then followed the Finnish coast west to the port of Turku.

Sophia flew out to join them for the next stage on July 20, a three-day voyage of about 350 miles from Turku to Klaipeda on the western coast of Lithuania, in which they were placed second.

She returned home for a few days’ rest before she flew back out for the final leg from Klaipeda to Szczecin in Poland, about another 350 miles, which they won before Charles flew out to join them.

The pair were sailing aboard the TS Royalist, which is the sea cadets' national training flagship. It is almost 105ft long and has two masts, the largest of which is 80ft.

The cadets, who were supervised by a team of 10 adults, were split into “watches” of six and worked in two-hour shifts, steering and navigating.

They stopped at ports along the way and took part in a range of activities including museum visits, rowing races and treasure hunts. They didn’t have many opportunities to phone home but their families could follow their progress online.

After completing the race and staying in Poland for a few days, the crew sailed back to London and were filmed by BBC news crews when they arrived on August 16.

As they passed under Tower Bridge, which was raised to let them through, Sophia was seen leaning over the top mast and waving to the crowds on the banks. The crew were told they had won at an awards ceremony that night and presented with trophies. It was the first time that a British ship had won in more than 30 years.

Sophia joined the sea cadets, who train at TS Guardian, off Wargrave Road, when she was 10 after trying bell boating while at Valley Road Primary School. She moved up to the marine cadets section at age 13.

She was around 11 when she started to experience persistent insomnia and often wouldn’t fall asleep until at least 3am.

She took medication for a time but has now made a full recovery and her mother says joining the cadets helped.

Mrs Stevens said: “We’re so proud of her because she’s done so well. Unfortunately, we were on holiday when she came back to London because they got back earlier than expected but we watched it on the television. I was elated to see her on the top mast and we could also see her holding the cup in the background when they were interviewing some of the crew. It’s an incredible feat and I was in floods of tears.

“We’re all so happy for her because she had such a tough time with her schooling. Her illness has made it hard for her to meet her full potential but this is an accomplishment she can really build on and maybe even build a career out of.

“Sophia was excited to have won and is already talking about what she can do next. She probably won’t discuss it at school much, though, as she’s very modest. If I’d done something like that at her age, I’d be telling everyone!”

Sophia said: “I really enjoyed going away, meeting new people and seeing more of the world. We all got on really well and felt like a family by the end of it. I had no idea that we might win. I just went to enjoy it and thought anything more would be a bonus.

“I was really proud when we went under Tower Bridge because there were huge crowds waiting for us. I couldn’t believe how many people there were.

“It was a great experience because I learned a lot about working together and to be more self-disciplined. The best moment was finding out that we had won — we were drinking champagne out of the cup!”