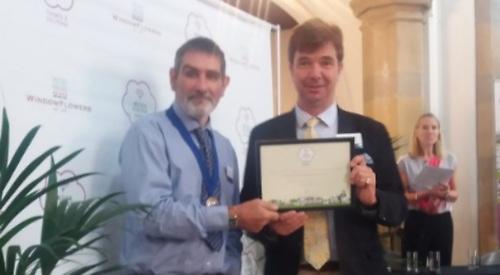 HENLEY in Bloom has won a sixth consecutive gold award at the Thames and Chilterns in Bloom awards.

Henley Mayor Kellie Hinton,  of the group, picked up the award at a ceremony in Amersham today (Thursday).

Despite receiving the top classification Henley lost out in the race to be best in the town category, as Amersham scooped the title for the second year in a row.

Henley in Bloom did a win a special award for best community involvement in the region.

Councillor Hinton picked up the award with fellow councillors David Eggleton and Lorraine Hillier as well as Caroline , another member of the bloom committee.

The town was judged in July by Julie Graham and Peter Goff, who given a two-hour tour of the town by Cllr Hinton and the town council’s park services manager Gareth Bartle.

It included the Regal Picturehouse, Mill and Marsh Meadows, Badgemore Primary School, a boat trip on the River Thames and Fair Mile vineyard.

The judges were shown some of the town’s best floral features including the celebration beds, sensory and Rotary gardens and living wall at Mill Meadows.

On the the judges were also shown hundreds of hanging baskets, which were supported by the Henley Standard’s Buy A Basket campaign.

Speaking after the tour Mrs Graham, from Bray, complemented the volunteers from Henley in Bloom and the Gardening Buddies for their work on behalf of the community.

Entries from Cuxham and Goring were also presented with at the ceremony at Amersham town hall.

This is the second highest classification in the community group awards.

This was presented to Councillor Eggleton, who is chairman of the association.

For a full report, see next Henley Standard.