I was honoured by future king and forgot to curtsy! 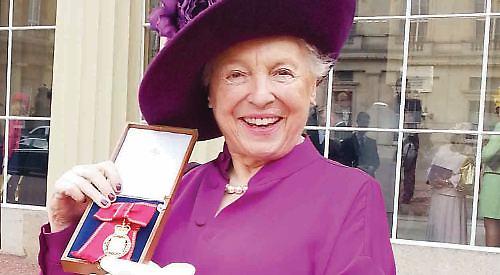 PHILANTHROPIST Dame Stephanie Shirley has received one of the country’s most exclusive honours.

The 84-year-old semi-retired businesswoman, who lives in Phyllis Court Drive, Henley, was made a Member of the Order of Companions of Honour for services to the computing industry and philanthropy in the Queen’s birthday honours.

She is one of only 65 people across Britain and the Commonwealth who can hold the title at any time.

Dame Stephanie, who was made an MBE in 1980 and a dame in 2000, was presented with her medal by the Duke of Cambridge during a ceremony at Buckingham Palace.

The award recognises her successful IT career and subsequent charity work, including her support for people with autism.

She had planned to attend with her husband Derek but he was unwell so she travelled to the capital with three friends the day beforehand and stayed overnight at the Savoy Hotel.

They returned to the hotel after the investiture for a celebratory lunch.

Dame Stephanie said: “I’ve always been a big believer in arriving on time so I was fashionably early, which meant I got a seat near the front with a wonderful view.

“The room had a flat floor so I wouldn’t have seen much if I’d sat towards the back.

“The ceremony lasted about an hour-and-a-quarter, which is a long time, although it’s understandable as there were almost 160 people to get through. The Duke was wonderful with everybody he spoke to, though I must admit I can’t remember what we discussed. He focused on everyone in turn and had a proper talk with them, so it didn’t feel at all rushed.

“The only downside to being at the front was that I was first up and, not having the example of anyone in front to follow, I forgot to curtsy.

“I felt a bit embarrassed but I know it wasn’t a problem as they are very understanding.”

Dame Stephanie was born in Germany to a Jewish father who lost his post as a judge under the Nazis.

She was sent to Britain with her sister Renate in 1939 under the Kindertransport refugee scheme and grew up in foster care in the Midlands.

She completed her secondary education in Oswestry, Shropshire, and then obtained British citizenship.

She began working as a computer programmer at the Post Office Research Station in London and obtained a mathematics degree by taking evening classes.

She married in the early Sixties and founded the software company Freelance Programmers in 1962, which employed mostly women. Her team’s projects included programming the flight recorder for Concorde.

Early in her career she adopted the pseudonym Steve Shirley in order to stand out in the male-dominated business world.

She later served as non-executive director for several companies, including the John Lewis Partnership, before her retirement in 1993.

In 1986 she set up the Shirley Foundation, which funds research into autism and related conditions like Asperger’s syndrome.

She was inspired to do so by her autistic son Giles, who died following an epileptic seizure aged 35.

Over the course of her life, she has donated more than £67 million of her personal wealth to various good causes.

Talking about her latest honour, she said: “I was surprised, delighted and proud because I arrived in this country as a refugee and have always wanted to give as much back as possible.

“The enormity of it really hit me at the ceremony and although I didn’t burst out crying, I did shed a little tear.

“The Queen presented my OBE and the Prince of Wales presented my DBE so I’ve now met the current monarch and two future ones. I’ve been to the palace several times now but it’s always an honour to attend.”