Debbie slips up with salsa 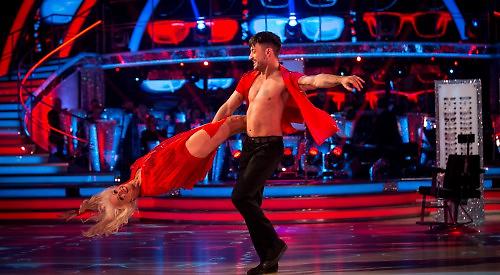 DEBBIE McGEE was seemingly pushed to her limits in her latest performance on Strictly Come Dancing.

The radio presenter from Wargrave made several errors during her salsa routine with professional dance partner Giovanni Pernice.

But the pair still scored 35 points out of 40 and the judges praised the difficulty of the steps and their daring lifts.

The score meant they slipped to third place on the leaderboard after three consecutive weeks in top spot but they still made it through to the next round at the Blackpool Tower Ballroom tomorrow (Saturday) night.

McGee and Pernice were the final couple to perform on last Saturday’s live BBC 1 show, dancing to Can’t Take My Eyes Off You by the Boys Town Gang.

The routine opened in an opticians with McGee dressed in a white coat pointing to letters on a board spelling “Debbie” for Pernice to read.

She then took off her coat to reveal a sparkly red dress and ran on to the dance floor to begin the salsa, a fast-paced mix of steps both in and out of hold.

McGee, who was recovering from a back injury, and Pernice completed three lifts and were cheered by the studio audience as they finished.

Co-host Tess Daly said to Pernice: “You are incredible. Giovanni, you are pushing Debbie to her limits. More daring lifts — you’re fearless, amazing.”

Head judge Shirley Ballas told the couple: “It was on its way to being a championship salsa but we had some mistakes. Let’s be fair here, you got the reverse turns, the spins, a very difficult step, more easy when it’s going the natural way, you went the reverse and missed his arm. There was a slight little bop before it went into the lift.

“I commend you, how you just get it and you go for that lift, even with the slight error before it. I mean, Debbie, you’re amazing.”

Daly then asked judge Bruno Tonioli whether the couple had done enough to book their tickets to Blackpool.

He replied: “You’ve got it first class even with the mistakes. Girl, what a saucy scrumpet you were out there. There was an error, I think you missed the hand, but what that was, was the essence of salsa and it was infused with the spirit of youth. It must be Giovanni’s effect, I don’t know.”

Craig Revel Horwood said: “Whatever you’re on darling, I want some. That is ridiculous, absolutely ridiculous. I love it.”

Darcey Bussell said: “It was extraordinary, the speed. Only you, being that compact and tight, were able to fit all that in.

“When you got into that lift one-handed up the thigh — oh my goodness, how you recovered, how you made it even look graceful, how you got out of that, incredibly impressive.”

The pair then made their way from to the gantry where co-host Claudia Winkleman said: “You extraordinarily brave woman.

“When Giovanni goes ‘the lift goes like this, let me just show you’, do you not just go, ‘do you know what, love, no’?”

On Sunday, McGee called into her BBC Radio Berkshire show, which was being hosted by weekday breakfast show presenter Andrew Peach.

She was calling from a car she was sharing with fellow contestants comedian Susan Calman, actors Davood Ghadami and Gemma Atkinson and paralympic sprinter Johnnie Peacock.

She said: “I really love that dance and I was annoyed with myself because I did make some mistakes but, hey, I still had a fantastic time and I was just amazed at how everybody was wowed by that lift.”

McGee explained that her Saturday had begun with a 20-minute physiotherapy session to work on her back after she pulled a muscle during a previous dance. She and Pernice were then on the studio floor going through the routine three times before spending an hour having their make-up and hair done.

McGee said: “They did my hair at 11am and it was much longer than it was supposed to be.

“They put extensions in and then once we had done the rehearsal with my hair like that they changed their minds so in the afternoon I had to go back and have them taken out.”

She described the mistake she had made in not grasping Pernice’s hand during the routine, which was difficult for viewers to spot.

McGee said: “Just before the big lift I spun round him where I did about six spins and he’s holding my hands around him and I missed his hand so I kept spinning until he grabbed me, which was completely my fault — I had my hands in the wrong place.

“I hadn’t made that mistake in rehearsals — I had made other mistakes but the spin had always been all right. It’s just nerves and everything as you are much more tense than you are in a rehearsal.”

She said her experience had helped her to keep going, explaining: “I can always get back into the music because I’m musical and I knew we had that big lift coming up so to do that lift I had to be in exactly the right place or it wasn’t going to work. Giovanni’s so strong he throws me around like I’m a doll. He lifts weights in the gym that are 20kg heavier than me, so I never worry. I have every confidence in him.”

McGee, the widow of magician Paul Daniels, said she was looking forward to performing at the Tower Ballroom.

She said: “Paul and I did a huge summer show, before we were married actually, when I was a dancer on his show, at the Opera House Theatre, which has special memories for me because we sold out every night and it’s a very big venue.

“I have been into the ballroom but when it was kind of empty and a bit like a ghost town so I can’t wait for them to light it all and for the audience to be there and actually dance on the ballroom floor.

“One of the reasons the pros love it is the floor is sprung. The studio floors we work on probably have got concrete underneath so there’s no give. When you dance on the sprung floor, apparently it’s a completely different feeling.”

TV presenter Ruth Langsford and her dance partner Anton Du Beke were eliminated in Sunday’s results show after a dance-off with Peacock and his partner Oti Mabuse.