Film-maker's vision of the effect of technology on us 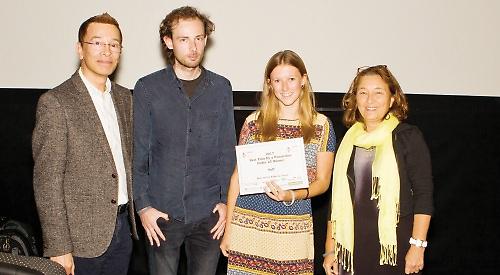 A YOUNG film-maker from Henley has won an award for her debut feature.

Rebecca Dixon filmed Self, a 12-minute science fiction drama about our obsession with technology, around the town in the summer last year.

The 22-year-old, of Gravett Close, was awarded the prize for best film by a director aged under 25 at this year’s Fisheye Film Festival in High Wycombe, held at the town’s Cineworld cinema last month.

Her film was shown on the big screen and she was presented with a certificate.

Rebecca was accompanied by her childhood friend Henry Betts, 23, of Northfield End, Henley, who added the film’s special effects using a computer.

The pair used to enter the Henley Youth Festival’s short film competition as teenagers and won on several occasions.

In 2010, they created a promotional video for The Passage, a charity that helps homeless people in London.

a world where people can “upload” their minds into robot bodies then purchase apps to change how they look or gain new sporting and academic abilities.

It focuses on a young man who has renounced the technology but changes his mind after falling in love with a woman who uses it.

However, he gets into debt after getting hooked on the new powers he can buy.

Judges described the film, which is set to electronic music and has no dialogue, as “innovative and thought-provoking”.

Most of the film was shot in five days at Meadows Farm Studios, off Marlow Road, which doubled as the main character’s flat. Scenes were also filmed at Badgemore Park Golf Club and in Henley town centre.

Miss Dixon, who lives with her parents Fiona and Peter, attended Valley Road Primary School and Gillotts School in Henley before studying for her A-levels at Sir William Borlase’s Grammar School in Marlow.

She was studying for a history degree at Durham University two years ago when she came up with the idea Self. She started writing it as a novel but decided it could work as a film after listening to music by Parra for Cuva, a German DJ, and imagining scenes from the story.

Mr Betts, who was just completing a special effects degree at Birmingham City University, agreed to help make the film.

The pair hired actors, a camera operator, a make-up artist and soundtrack composer by advertising online and recruited a number of friends, including Mr Betts’s younger brother Jonathan, to appear as extras.

Miss Dixon, who now works in digital marketing, said: “I’ve always been interested in technology and the effect it has had on my generation.

“I grew up with a group of friends who got more and more into their iPhones and it has always intrigued me how it affects the way we interact, or sometimes don’t.

“I would like to finish the story as a novel but for the we had to work out the best way of presenting it visually and in a relatively short time to keep our costs down.

“The shooting days were long but we managed to do it in a week and we had a lot of support from friends and parents.

“We were also very lucky to find locations where we could shoot at student rates.

“People have said the film reminds them of the dystopian TV show Black Mirror but I’ve never seen that.

“I was more influenced by the news and what I see happening around me.

“I think we’re a lot closer to this kind of future than we realise and we need to think about how we’re using technology as it’s evolving faster than we can adjust to it. Social media sites like Facebook are very addictive and we now know the makers spent a lot of time and research making it that way.

“People can spend a lot of time cultivating an image of themselves online instead of developing their real selves.

“Technology itself isn’t bad and it can have wonderful uses but we should find ways to ensure it brings people together instead of isolating them.”

Miss Dixon hopes to enter Self into more festivals next year and would like to go on to produce current affairs documentaries.

She said: “It was fantastic to win at Fisheye and I really enjoyed watching all the other entries. The best thing was seeing our work up on the big screen, which is what we’d set out to achieve.

“We also took the biggest crowd to the ceremony, which I was quite proud of!

“We had no idea what kind of reaction the film would get, so it was very exciting to have that kind of recognition. I’d love to do another but it all depends on what new ideas I have.”

Mr Betts, who also attended Gillotts and Sir William Borlase’s, said: “When I first heard Rebecca’s idea I thought it was a bit wacky but also very interesting and it presented a lot of opportunities to do some interesting visual effects.

“We’ve always complemented each other creatively because she comes up with the stories and I’m the ‘techie’ guy who helps bring them to life.

“There was quite a bit of pressure because effects add a layer of polish but here they were crucial to the story.

“I was designing all the pop-up messages that people could ‘see’ whenever they used the robot bodies.

“It took a while but I was pleased with the results and it was good to see it up on the big screen.

“It was also great to win as we were up against films with much higher budgets.”