We're tap of the world, mum 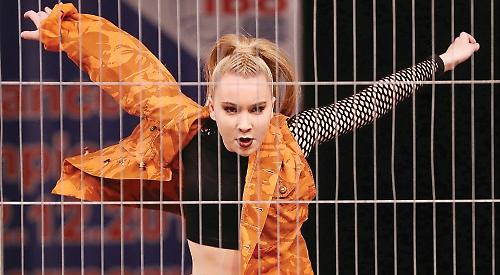 TWO teenage tap dancers from Woodcote have been crowned international champions for the third year running.

Lily Clifton, 17, and Astrid Tozer, 14, were among 24 youngsters who won gold in the adult formation section of this year’s World Tap Championships held in Riesa, Germany.

They danced a routine called Star-Crossed, a modern interpretation of Romeo and Juliet set to a medley of modern pop songs, with Astrid playing Juliet.

The youngsters were marked on their individual performances and their ability to dance as a team.

Lily was also one of 12 teenagers who won the adult small group section with a routine about escaped convicts set to the song Run Boy Run by Woodkid. The dancers performed moves around two metal benches on wheeled podiums.

The girls both learn with Dance Connection, a school run by Lily’s mother Sam, and were competing as members of Tap Attack, the national tap squad.

Lily, who attends The Henley College, has been competing for the past five years while Astrid, who goes to Langtree School in Woodcote, has competed for four years.

Both girls were part of the winning GB adult formation team in 2015 and again last year.

Their parents accompanied them at the week-long championships in Germany and watched the gala final, which was filmed and broadcast live over the internet, so the girls’ friends could see it.

Mrs Clifton said: “It’s fantastic when they win because of the hard work they put in. It’s wonderful to see it all come together.

“This was even better because we were already holding the title.

“It was a challenge because they had to form various shapes as a group but they did a marvellous job and really upped their game as they made their way through each round.

“They were watching footage of each performance and looking for ways to improve.

“We had so much support from back home and thanks to the live broadcast our phones were all going crazy as soon as the result was announced.

“The dancers were all absolutely delighted — you could see them all screaming and crying and hugging each other. It’s really good for them because the winners get a fanfare and their medals are brought out on a cushion while the national anthem plays.

“It’s a great experience and although they miss some school it teaches them some great life lessons about the value of hard work and dedication.

“I’m very proud of Lily because she has made some incredible improvements under Tap Attack.

“The standard is just phenomenal and it’s a serious achievement to reach even the semi-finals, let alone win.

“She’s doing her A-levels now but wants to dance professionally and hopes to go to dance college once she’s 18.”

Astrid’s mother Tracey said: “It was so lovely to see her performing on stage. I felt very proud and think she did brilliantly in all the dances she took part in.

“It was a great experience for her and a real team effort from everyone who performed over the week.”