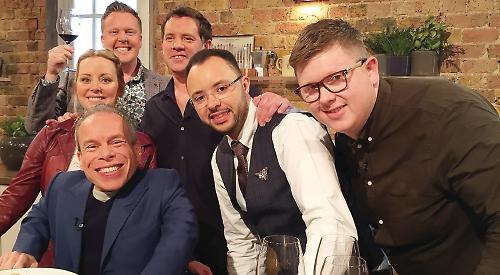 A PAIR of restaurateurs have spoken of their “amazing experience” making their first live television appearance.

Ryan and Liam Simpson-Trotman, who run Orwells in Shiplake, were guest chefs on last week’s edition of Saturday Kitchen on BBC 1.

They also competed in the show’s omelette challenge, in which they had to whip up a plain three-egg omelette as quickly as possible.

The couple, who were married in August, were invited to appear after helping TV chefs David Myers and Simon King, the Hairy Bikers, during their appearance at the Hampton Court Palace Flower Show last summer.

Ryan and Liam arrived at the studio in Clapham at 6am on Saturday, four hours before the broadcast, to prepare their ingredients and then be made up for the cameras.

Once on air, they made their dish featuring lightly-cooked duck hearts, cured duck slices and duck jerky as well as shiitake mushrooms and a gravy made with soy sauce and mirin, a type of Japanese rice wine.

While preparing it they talked about their restaurant, which they opened in 2010. They grow about three-quarters of their own fruit and vegetables and keep bees which supply all their honey.

The pair discussed beekeeping with the show’s wine expert Olly Smith, who asked: “Do you name every bee?”

Liam replied: “I don’t name every one, but I do name every queen bee Beyoncé!”

Davis, who has played various roles in several Star Wars and Harry Potter films, was reluctant to try the dish because he doesn’t like offal.

Ryan said: “If you just call it ‘duck and crumpets’ people will be willing to give it a go because they just think, ‘oh well, I’ve had duck before’.”

Davis replied: “I’d eat it at a push but you’re not telling the truth on your menu. If I was at your restaurant and ordered that, I’d ask if I could swap the duck hearts for a bit of jam or some of your honey.”

However, after taking a mouthful, he said: “It’s lovely. You’ve got a lot of different textures and flavours going on.”

Ryan completed the omelette challenge in just over 43 seconds and Liam finished in under 47, putting them both among the show’s top 10 contestants.

They were faster than former Spice Girl Mel C, who made hers in a little over 47 seconds when she appeared on the show in 2011, and Selin Kiazim, a finalist on this year’s series of the BBC’s Great British Menu.

When filming wrapped up at midday, the couple stayed for a further hour to chat with the crew and get Davis’s autograph.

Now they are preparing to
re-open their restaurant on Wednesday following the Christmas break.

Ryan said: “We were shown very briefly on television during the Hairy Bikers’ event but this was our first proper live appearance with no room for error.

“We chose that recipe as it reflects what we’re about — local and sustainable produce and using the whole animal, or nose-to-tail cooking. It’s also something a bit different. It was an amazing experience to be on show together doing something we love. Warwick was really, really good fun and we were a bit starstruck to meet him because he’s a pretty massive deal.

“A few things get checked over in advance but all the cooking is done there and then so all we needed was a bit of make-up to avoid looking too shiny under the camera.

“I think it will raise the profile of what we do at Orwells and it was a great chance to shout about our quality.

“It also breaks up our routine as it’s nice to get away from the kitchen for a bit. We’d love to do other bits and bobs on television and hopefully it will open up that opportunity. It’s great to talk on a national scale about something you really care about.

“The duck hearts were a somewhat controversial choice but they’re really nice and you just have to think of them as duck.

“I was so pleased to see it go down well with Warwick. He isn’t keen on offal but we only needed to tempt him into trying one bite. He was very complimentary, although I suspect he’d still have preferred a dollop of jam! Liam and I are quite competitive so we really got into the omelette challenge.

“In the world of professional cooking, making an omelette is the basic test of a decent chef so there was a lot of pressure to get it right and it was the only time I felt nervous.

“The studio was a really fun environment and we enjoyed being able to chat with everyone afterwards. The whole crew were so professional and made it really easy for us.”