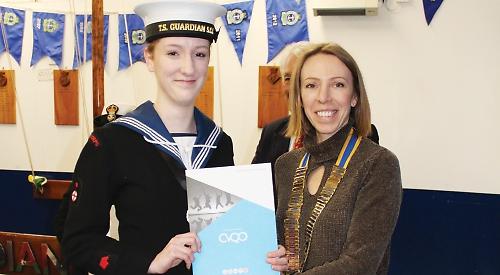 She presented the awards with Abigail Bollon, the officer in charge, in front of the cadets’ families and friends and the unit staff at their base, TS Guardian, off Wargrave Road, Henley.

The awards were to recognise the cadets for their hard work and achievement over the past year.

The ceremony included the presentation of the colours and an inspection of ship’s company by Councillor Hillier.

PO Bollon said: “Henley is a good unit in a fantastic location that has amazing staff and cadets. I would like to thank everyone for all their efforts and hope that this year will be as good as last year — and long may it continue.”

Cllr Hillier said how impressed she was by the cadets, adding that many of them grown and developed since her last visit in 2015 when she was Henley Mayor. She said she believed that being a cadet taught young people practical lifeskills as well as building self-esteem, respect and politeness.

She said how happy she was to continue the club’s long association with Henley Sea Cadets and presented PO Bollon with a cheque for £1,000.

He then asked for everyone to include Charlotte Bainbridge and her family in their thoughts and prayers.

Miss Bainbridge is a former Henley Sea Cadet who is currently in the intensive care unit of the British Hospital in Montevideo after being seriously injured in an accident in the East Falklands.

The award winners were as follows:

Coxswain of the year: Brooke Sumner

Cadet of the year: Charlotte Searles.