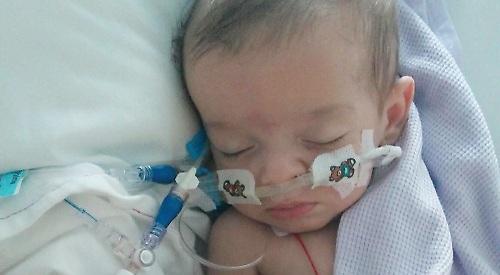 A MOTHER from Henley is to run from London to Brighton for charity.

Jessica Hamer, 37, will embark on the 100km challenge tomorrow to raise money for the Sick Children’s Trust.

The trust supported her when her baby son Ethan Ucar was being treated for a heart condition after being born six weeks premature.

When he was six months old, Ethan underwent surgery at Great Ormond Street Hospital in London for coronary heart disease as his heart was failing to develop and he was not growing as he should have been.

The trust provided a “home from home” room at the hospital for the family, including Ethan’s father Alper Ucar and his twin sister Rose. This meant the couple were only a few minutes’ walk from Ethan’s bedside throughout his stay.

Ethan is now 10 months old and, thanks to his surgery, can live at home without medication.

Ms Hamer, a novice runner, took on the challenge in order to thank the charity for its help.

She will set off from Richmond and run through south-west London before following mostly off-road paths through the Surrey and Sussex countryside including the North and South Downs.

Ms Hamer said: “I expected health complications when the twins were born premature but had never envisioned what we were about to go through.

“During his first six months, Ethan was admitted to hospital more times than I can remember which was so hard for us, especially as we had Rose to care for too.

“As a family. we were often separated, with Alper staying at home to look after Rose while I stayed with Ethan in hospital.

“What were supposed to be the most magical moments with our new family became the most traumatic of our lives.

“When we arrived at the hospital for Ethan’s surgery we were on edge, anxious and emotionally overwhelmed, so when the trust offered us a room at its Rainbow House accommodation, I burst into tears.

“Having a ‘home from home’ meant we could both be there for Ethan and still look after Rose. We could support each other and maintain a sense of ordinary routine.

“When we returned home, I promised I would do something significant to raise awareness for the charity and I thought this challenge ticked the box.

“I’ve never even completed a marathon before, let alone something like this, so I’ve forced myself way out of my comfort zone.

“If I complete the race in under 20 hours I will be happy. I’m determined to make everyone proud, especially Rose and Ethan, and raise as much money as possible for this amazing cause.”

To make a donation, visit www.justgiving.com/fundraising/jess-hamer