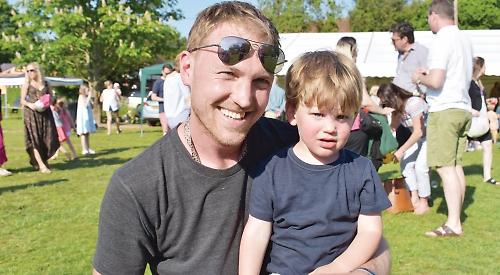 More than 300 people joined in the fun on Top Common where there was music from Frisco Jaxx, a barbecue, bar, inflatable slide and dog show.

There was also face-painting, a “guess the balloons in the mini van” game, penalty shoot-out competition and tag rugby.

More than 200 cup cakes were baked and donated by villagers.

Many guests brought a picnic and enjoyed Pimm’s and Prosecco on the common.

A large TV screen at Peppard Primary School meant people could watch the wedding and later the FA Cup final.

The party was organised by the Peppard Revels and the school.

Linda Collison, a member of the group, said: “It was marvellous. Everybody seemed to be eating, drinking and laughing and having a fun afternoon.

“History has taught us that if there’s a national event people get behind it.”

Mrs Collison thanked the team of volunteers who helped set up and clear up after the celebration.

Gregory, who won gold medals at the London and Rio Olympics before retiring, said: “Peppard primary is my children’s school so we’re here to support it.

“I was asked to open it and of course I was more than happy to.

“It’s the perfect excuse to get together and celebrate. I’m really proud to be British and to live in this country and this part of it.”

Resident Trish Rockell said: “It’s really nice to have something like this for people to come and join in. It’s good to have a drink and watch the world go by.”