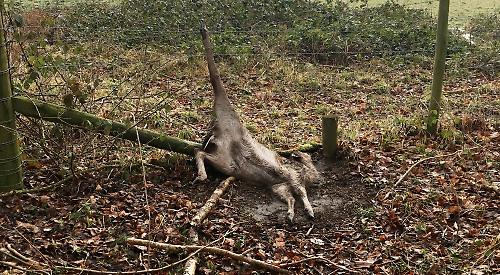 MEMBERS of the National Trust are to vote on whether to ban barbed wire fencing from its properties.

The move follows the death of a deer at Greys Court earlier this year.

David, Michael, and Jemima Sarson, Lucy Davies and Anne Hughes have put forward a resolution to the trust’s annual meeting on October 20  calling for barbed wire to be outlawed.

The resolution, which has been signed by the required 50 members, says: “We believe that barbed wire is an outdated product and that it causes injury to wild animals and people.”

• With immediate effect, the trust will not, or allow its tenants to, install any new or replacement wire on any of its properties

•It ientifies higher risk sites, such as Greys Court, and removes the barbed wire immediately.

The deer that died on trust land near Greys Court in March was discovered caught in barbed wire by Judy Dinsdale, of Northfield End, Henley.

At the time, she told the Henley Standard: “The National Trust says it wants to encourage wildlife and woodland life but at the same time they are installing barbed wire. I don’t know how you can defend it when you see that deer. It must have died in such agony.

“I want to see double strand barbed wire removed from all National Trust properties. The trust is rich enough to remove it and put up an alternative.”

She had been a member of the trust for about 50 years but left last year in protest at the installation of barbed wire at the Greys Court bluebell woods.

The trust’s board has recommended that members vote against the resolution.

It said: “As a conservation charity, and one of the nation’s biggest landowners, we take our role in protecting the wildlife that lives on our land very seriously. For the people managing our land this means having to make careful decisions about many aspects of land management, including about the use of barbed wire.

“The population of deer in the UK is at an all-time high. In spite of this the number of incidences of deer (and other wildlife) being harmed by barbed wire is extremely low.

“Deer will normally try to find a way around, through or under a fence before trying to jump over it.

“The relatively rare incidents of deer being caught in barbed wire fences usually happen when they are trying to jump over a fence.

“The trust uses barbed wire to manage livestock. It enables us to protect certain areas, including areas of high conservation sensitivity, from the damage livestock can cause and prevents them from exerting pressure on fencing and potentially breaking through.

“The alternative is to use plain wire above stock netting. This does not deter livestock in the same way, as they frequently push it over.

“We try actively to manage this small risk to wildlife.”