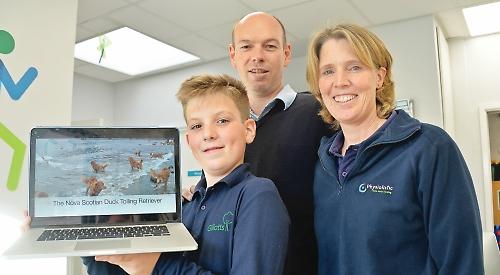 A BOY from Henley has produced a music video for Sir Tim Rice.

Connor Botha, 12, was invited by the award-winning lyricist to create the film for his song The Nova Scotian Duck Tolling Retriever thanks to his mother Angela, a physiotherapist.

Sir Tim discussed the song with her while he was attending an appointment at the Physiolistic sports injury clinic at Henley Rugby Club, which she runs with her husband Clint.

He told her he needed a promotional film clip and she replied that her son had a keen interest in the subject. Connor, a pupil at Gillotts School in Henley, has been shooting and editing videos of family films since he was about eight and has won prizes in the Henley Youth Festival’s short film competition for the past two years.

Sir Tim, who lives near Hambleden, invited him to produce a rough cut of the video which they then edited together. The film will be released on YouTube and the lyricist’s website on Monday.

Sir Tim, 73, wrote the song about 10 years ago with composer Alan Menken, with whom he had previously collaborated on the soundtracks for Disney’s Beauty and the Beast and Aladdin.

It is about the Canadian dog breed, of which he owns one named Eli.

The song was originally released in aid of Shine On! Kids, a charity that supports children with cancer and other serious illnesses in Japan.

The video features both animated still images and video clips of the breed.

Connor assembled them using iMovie and used a “green screen” in which a subject is filmed in front of a green surface which is then digitally removed and replaced with another background.

He has already released a short preview of the film, which the Nova Scotia Duck Tolling Retriever Club of Britain has shared with its members.

If the film proves popular, the single could be re-released with the proceeds going to the charity.

Connor, who lives in Manor Road, Henley, with his parents and sister Kirsten, 10, said: “Tim was very understanding, helpful and funny so it was really good fun working with him. He gave me the lyrics and I just dumped all the images into the editing software then played about with them until I had something that worked and fit the beat. I’m really proud of how it finally turned out and I think Tim was as well.

“I know The Lion King and things like that very well so I was amazed to be working with him. It was all a bit surreal and overwhelming but I’m really grateful for all his help.

“I’ve only told a few friends at school but I don’t think they believed me so it’s going to be a real shock when I drop the bomb next week!”

Sir Tim, who moved to this area from London last year, told the Henley Standard: “The song was rather successful in Japan but I always felt that it needed a wider audience.

“I’d always thought it would be lovely to make a little video but I don’t have the first idea about how to do it, so when Angela mentioned that Connor enjoyed making videos I decided he should have a go.

“At the very worst it would have been a bit of a fun project for him but he did a very good job, especially considering his age. I made a few suggestions but he more or less delivered exactly what I needed on the first attempt. If there is any interest then we can look at releasing the song, although there’s no point getting ahead of ourselves. We’ll just get the video out and see what happens next.

“It was a great opportunity for Connor to show off his talent and I think it’s a nice little video. We’re not making Lawrence of Arabia but it’s a lovely showcase for the breed.

“Eli was the inspiration for the song originally and at 15 years old he’s getting on a bit but they are marvellous dogs. I’ve never seen him catch a duck but they’ll certainly jump into the water whenever they get the chance.”

He won the youth festival film contest’s best script category in 2016 with an entry called A Journey On Foot.

He used a smartphone attached to a selfie stick to film a walk around Henley and parts of Spain on a family holiday to show the world from a foot’s perspective. He covered his shoes with plastic eyes so they served as the main “character”. His award was presented by film director Paul Greengrass, who lives in Henley.

Connor won again at this year’s festival with a piece called Mission: Barcelona in which he played a “spy” looking to retrieve an unknown object from the city’s Olympic stadium.

He is now working on a promotional video for Lyra in Africa, a charity run by Maria Spink, from Hambleden, which provides education to girls in remote parts of Tanzania in both traditional and digital skills.

Connor said: “I’d definitely like to go into it for a living. I enjoy filming but I think I enjoy editing most and the technical side of things so producing the video for Tim was really good experience.”

Mrs Botha said: “This has been a really enjoyable project for Connor. I’d never heard of the Nova Scotia Duck Tolling Retriever before but the children now want one!

“Connor’s very clever and I’m very proud of how much he has learned since he started making films. It’s much better to see him doing that than playing computer games! It was wonderful that Tim gave him this amazing opportunity and he has really made the most of it.”

Mr Botha said: “Connor has always loved the technical aspects of film-making, particularly when it comes to putting movies together. If his homework includes an optional video project, he’ll always do that in preference to anything written.

“He has loved taking video and photos on our smartphone from a very young age and he has become quite a whizz with Photoshop so he’s already helping us refine our marketing materials for the business.

“Connor is incredibly excited to work with Tim because, to him, it’s the guy who wrote the lyrics to The Lion King and it feels surreal to listen to those songs then realise he’s working with him.

“He is grateful for the opportunity as it gives him the inspiration to carry on pursuing what he loves. We’ve stressed that this is a real once-in-a-lifetime thing but I think he already understood that.

“He’s very keen to get involved in the film industry in some form or another. It’s his real passion and it’s the one thing we never have to nag him to do. He is so thankful for Sir Tim’s kind offer and all the advice he has given and worked his hardest to get it just right.”

Sir Tim made his name when he wrote the lyrics to Sir Andrew Lloyd Webber’s Joseph and the Amazing Technicolor Dreamcoat in 1968. The pair worked together on Jesus Christ Superstar in 1970 and Evita in 1976 as well as Cricket, a short musical to commemorate the Queen’s 60th birthday in 1986.

He worked with Sir Elton John on The Lion King soundtrack and with Abba’s Benny Andersson and Bjorn Ulvaeus on the 1984 musical Chess.