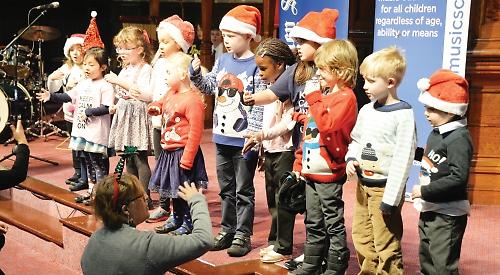 THE organiser of the Henley Living Advent Calendar is urging residents to support this year’s “big finale”.

Richard Rodway said that after almost three weeks of diverse performances, the annual charity event is building towards a record-breaking climax with the final performance at St Mary’s Church in Hart Street on Christmas Eve.

So far, a total of £3,779 has been raised from bucket collections and the sale of raffle tickets. This is only £21 less than it had made by the same point last year. However, the 2017 Living Advent Calendar enjoyed a massive surge in its final week and Mr Rodway is hoping for a similar effect this time.

He said: “More so than ever, we’ve seen such an incredible variety of performers over the past week and there’s been a real sense of community every night.

“We went from classical music and drama to rock ’n’ roll in a church and the firefighters’ show, whichis always popular, then a trip around the world and all the way back to classical again.

“That variety is what keeps people coming back and we will be really building to a crescendo as Christmas approaches.

“Most people will be off work and school from Friday and in a celebratory mood, so I would encourage everyone to come along and enjoy as many of our amazing acts as possible.”

On Wednesday last week, scores of people packed into Magoos bar in Hart Street for a recital by members of the Henley Youth Chamber Orchestra.

They played parts of Winter and Autumn from Vivaldi’s Four Seasons and the first movement of Elgar’s Serenade for Strings as well as the Pastorale from Corelli’s Christmas Concerto and parts of Telemann’s Concerto in G major and Vivaldi’s Concerto in B minor.

Afterwards, town councillor David Eggleton impressed the crowd with a magic trick in which he asked a member of the audience to choose a card from a deck which then appeared in Mr Rodway’s breast pocket. The Cook Curry Club, of Henley, provided chicken or vegetable biryani with Brussels sprouts. A collection was taken for the Chiltern Centre for disabled children.

Daisy Smith, who runs the group, sang Have Yourself A Merry Little Christmas from a first-floor window before the children performed.

They read poems called Snow Day, Chubby Little Snowman and Little Snowball and acted out a short adaptation of The Pied Piper of Hamelin.

They were then treated to a surprise visit by Father Christmas.

Proceeds from the night went to Camp Mohawk in Wargrave.

Their set included I Won’t Back Down by Tom Petty and the Heartbreakers, Baby One More Time by Britney Spears, Hey Hey, My My (Into The Black) by Neil Young, Seven Nation Army by the White Stripes, Never Gonna Give You Up by Rick Astley and Merry Christmas Everybody by Slade.

More than 70 people attended the concert, which raised £134 for the Berkshire Multiple Sclerosis Therapy Centre.

There was a raffle with prizes including a cake baked by Didi.

Mr Rodway said: “They are really talented kids. It’s exciting for them to play at such a great venue and this is the ‘before-they-were-famous’ show.”

On Saturday night, firefighters sang their own version of The Twelve Days of Christmas in a performance at the fire station in West Street.

They replaced the lyrics with phrases about their jobs, including “five golden buckets” in which they sprayed firefighter Harrison Lacey with water.

They also lit up a tree which had a stuffed cat in it to represent the final line: “And a cat stuck up in a tree.”

The words were shown on a projector screen so the audience could join in.

A raffle raised £88.71 for the FISH Volunteer Centre at Sonning Common.

Mr Rodway said: “This is what the Living Advent Calendar is about. Year after year, the guys come up with their own thing.”

On Sunday evening, the d:two centre in Upper Market Place hosted a performance by the Nomad youth and community project, which is based there.

Performers dressed in traditional costumes celebrated the ways in which different countries observe Christmas, from eastern Europe and Africa to the Far East.

Spectators watched from the rear walled garden while enjoying mulled wine and mince pies provided by the buisness and Dallas & Co solicitors.

Miss Cox, 26, who lives near Henley, performed Winter Wonderland, In The Bleak Midwinter, Chestnuts Roasting On An Open Fire and Have Yourself A Merry Little Christmas as well as Ständchen (Serenade) by Schubert and Porgi Amor by Mozart.

She concluded with a rendition of Rockin’ Around The Christmas Tree.

She said: “I was a bit scared initially but it was actually a lot of fun. I haven’t had to sing with a microphone for a long time but I knew the repertoire and had a lovely supportive audience.”

On Tuesday night, children from Henley Music School played festive songs for a crowd of about 100 people at Christ Church in Reading Road.

The group’s string, brass, violin, clarinet, saxophone and flute groups performed, as well as its choir and band, while wearing Christmas jumpers and hats.

The senior strings performed Ding Dong Merrily on High, then the choir sang Rudolph the Red-nosed Reindeer and the wind section performed It Came Upon the Midnight Clear.

The violinists played You Raise Me Up, the woodwind section performed Frosty the Snowman and the flute group played Deck the Halls.

A trio of musicians playing string instruments entertained the crowd with a carol medley and a four-piece band played Riptide by Vance Joy.

The evening was raising money for the music school, a charity that provides musical education for all ages and subsidises lessons for those who can’t afford them.

Mr Rodway said: “People have said it feels like audience numbers are up but the takings are our only real barometer and we’re nothing if not consistent in that respect.

“Last year smashed 2016 out of the park because of a huge increase in the closing evenings. It suddenly moved ahead by something like £600.

“We’ve effectively got a five-day weekend coming up and we’re certainly planning a big finale so we may see a similar increase. It’s clear that we have a solid bedrock of support so I won’t be losing any sleep.

“We bring a good cross-section of Henley together to enjoy the festive season and the fact that we make money for these wonderful causes is a bonus.”