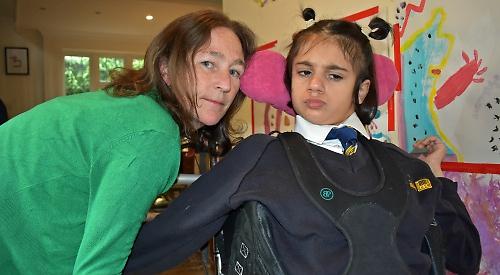 FAMILIES of disabled children who have been visiting the Chiltern Centre in Henley for years say they will be deprived of a vital lifeline when it loses the right to give respite care to under 16-year-olds.

The charity is to be stripped of its Ofsted registration on June 19 as it now mostly cares for older teenagers and young adults, which is against the terms imposed by the education watchdog.

Instead it must register with the healthcare regulator, the Care Quality Commission, to accept only disabled people who are aged 16 to 25.

The centre has told the relatives of eight younger clients that they can no longer attend the centre off Greys Road.

Those affected say the centre allowed their children to socialise with others while the rest of the family had a break from the pressures of caring around the clock.

They include Jules Bishop, from Cookley Green, whose 14-year-old daughter Poppy has been visiting the Chiltern Centre for about a decade.

The teenager has severe cerebral palsy due to oxygen starvation at birth and is paralysed in all four limbs.

She uses a wheelchair, cannot speak and needs help with basic tasks such as changing her clothes or being fed, which is carried out five times a day via a tube to her stomach.

Her mother must often intervene in the middle of the night if, for example, Poppy rolls into a position from which she cannot correct herself or catches a cold and cannot breathe without help blowing her nose.

Poppy also needs trapped air to be vented from her stomach if she swallows large volumes overnight and this can take more than an hour.

Carers funded by Oxfordshire County Council are meant to visit Poppy at home twice a day, once at breakfast time and again in the evening, but they sometimes miss appointments due to staff shortages.

At busy times they miss up to half their visits and in one unusually bad week they made just three of 14.

In 2009, Poppy was referred to the centre by the council, which paid for her to visit for about six hours on one Sunday every month. She stayed for longer periods during the school holidays.

She would enjoy taking part in activities with the friends she made there and often went on day trips to zoos and farms or on cruises along the River Thames on the boat Rivertime, which has been converted so that it is accessible to disabled people.

This allowed her mother to rest and spend time with her son Felix, now eight. The pair would visit extended family or go to places that Poppy doesn’t enjoy, such as the cinema.

Ms Bishop said: “It’s extremely hard for a child with disabilities to make and maintain friends and Poppy had known some other visitors to the centre for a very long time.

“She will hopefully go again when she is 16 but it’s going to be a year-and-a-half of struggling.

“It was six hours every month which I could spend with my other child, who has his own struggles, and it’s always difficult to give him enough attention while meeting Poppy’s needs.

“We’d go and have lunch with his granddad, which was much easier for me when I didn’t have to feed Poppy, and she felt she had somewhere to go that was ‘hers’. It gave her a degree of independence.” Ms Bishop said she was “gutted” when she learned that the Chiltern Centre would no longer be able to take Poppy as the only alternatives are in Abingdon and Oxford.

She said: “I won’t be using those as it isn’t worth it. I’d be driving a three-hour round trip just to get six hours’ respite and that isn’t enough time to get any benefit whereas the Chiltern Centre was only 20 minutes away. It’s a case of the pain outweighing the gain, sadly.

“We need to have services like that locally and I think Ofsted should look at the needs of the area rather than treating everything as a box-ticking exercise. We’ve lost something very helpful and will have to just get by with nothing to replace it.

“I don’t understand why the age group issue is such a problem. The only reason there are so many older users is because they’ve been there for years and many of them are Poppy’s friends.

“I know that other parents are complaining to Ofsted but my energies are focused elsewhere at the moment. It might sound silly but you wonder if there’s any point because it’s unlikely that they’ll listen.

“The Chiltern Centre has always been a fantastic place with trained staff who know every child’s needs. I never once had concerns about Poppy’s safety.

“I always knew she was safe there and I wouldn’t have that same trust in somewhere different.

“I once went on holiday for a week and she stayed there but that’s not an option now.”

Andy and Nikki Kelly’s 11-year-old son Toby had visited the Chiltern Centre since 2015 as he relies on a wheelchair following a severe bout of meningitis.

The couple, from Dorchester, have complained to Ofsted, saying its ruling is a “devastating blow”.

The Kellys say: “We’re appalled that such an impactful decision has been made with no consultation with those most affected and with such short notice that finding alternatives is impossible. We cannot see how this is in the best interests of the children and their families.”

He said: “My child’s mental health and wellbeing will now be significantly adversely affected by your decision. You are taking away his happiness for no discernible purpose.”

Ofsted’s decision follows a visit in January in which it deemed the centre “inadequate” after learning that managers had failed to report a safeguarding concern to the county’s external panel. No one was harmed but it said they should have followed protocol.

The centre says the watchdog overlooked its breach of registration for many years as it had no control over the age of clients being referred and it would have been financially unsustainable to look after “wholly or mostly” younger children as it was meant to.