Woman gifts £400,000 artworks to Britain and the tax rebate to charity 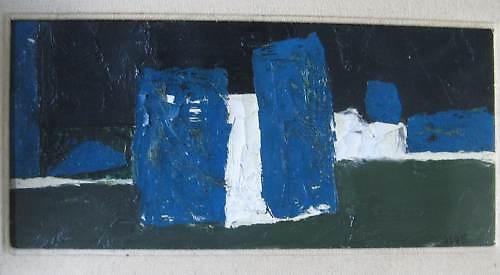 THREE works by British modernist artists worth an estimated £400,000 have been gifted to the nation by a woman from Turville.

Kate Ashbrook has donated sculptures by Dame Barbara Hepworth and Denis Mitchell and a painting by William Scott to the Hepworth gallery in Wakefield, West Yorkshire, where they will go on display next month.

The pieces were owned by her aunt Nancy Balfour, an art collector and senior editor at the Economist magazine, who was chairman and president of the Contemporary Art Society and knew Hepworth.

She had kept them at her flat in Eaton Square, London, and when she died in 1997, aged 86, they were passed down to her family.

The artworks were acquired for the nation through the Cultural Gifts Scheme, which enables UK taxpayers to donate important objects to the nation in return for a tax rebate during their lifetime.

Hepworth’s Orpheus, dated 1956, is a bronze sculpture on a wooden base and one of four Orpheus pieces.

The sculpture is an early example of Hepworth’s move from carving predominantly in stone and wood to including bronze and brass among her materials of choice.

Hepworth, who died in 1975, studied at Leeds School of Art from 1920 to 1921 alongside fellow Yorkshire-born artist Henry Moore.

Trevarrack by Denis Mitchell is a polished bronze sculpture mounted on a slate base. It is dated 1961 and signed with his initials.

Mitchell was Hepworth’s assistant from 1949 to 1959 and his work clearly shows her influence. He died in 1993.

Small Cornish Landscape by William Scott was painted around 1953 and is signed “SCOTT” in the lower right corner.

Scott spent a few months in Cornwall in 1935 and 1936 and returned in the early Fifties. Known for his still life and abstract paintings, he died in 1989.

Miss Ashbrook, who is general secretary of the Henley-based Open Spaces Society, said: “I am pleased that these striking and important works by British modernist artists have found a permanent home at the Hepworth Wakefield, where they will complement the core collection.

“These works will be on permanent display and properly looked after in the right place.

“My aunt, who was a commanding figure in the modern art world, could have found no better place for them to live.” In her will, Miss Balfour informed her family that they could choose pieces from her art collection.

Miss Ashbrook said: “We were amazed because we didn’t think she had such strong feelings for the family because she was a very independent lady. We were quite touched by it.

“We had to pay the probate valuation and the rest went to the Contemporary Art Society, which distributed works to small museums that would benefit from them.

“My parents particularly liked these three works and we were advised, purely from a tax point of view, that one of us girls — my sister Sue or me — paid for them from the estate then we wouldn’t have to pay inheritance tax on them later.

“I paid for them but I have to say I can’t remember what it was but it wasn’t very much. What my sister and I both probably said was our Nancy would have liked us to have taken some more modern things. We tended to choose more classical pieces but we were very happy with them.”

The artworks remained at her parents Jay and Margaret’s home in Denham, Buckinghamshire, until her mother died in 2018. Her father had passed away in 2002.

Miss Ashbrook said: “I was wondering what to do with them and I came across Barbara Hepworth’s granddaughter, Dr Sophie Bowness, who said, ‘you could give them to the Hepworth’.”

She said it was a long process to donate the pieces under the Cultural Gifts Scheme but she would receive a tax rebate of £124,500 over five years.

“The money is very likely to go into charitable things because I do like supporting charities,” said Miss Ashbrook.

“It is a gift to the nation and I get something in return. I can’t pretend I don’t, it is all public.

“You get landowners who get that sort of tax concession for allowing public access to their land and I have to say, quite often, they don’t provide it properly or they have blocked rights of way on the land.”

Miss Ashbrook, who also chairs Ramblers Great Britain and is vice-chair of the Campaign for National Parks and patron of the Walkers Are Welcome Towns Network, added: “Orpheus is absolutely splendid.

“Denis Mitchell’s sculpture, I like that very much — it looks a bit like a Cornish tin mine.

“It turns out my aunt knew Barbara Hepworth quite well and commissioned a work from her.

“We knew she had an awful lot of works because she had this flat in Eaton Square that was jammed full but we found there was an awful lot in the cupboard.

“I regret not knowing her better in her lifetime.

“She discovered people before they become famous, like [painter] Howard Hodgkin. She just had a really good eye but she only ever bought things she liked.”

Simon Wallis, director of the Hepworth gallery, said: “We are thrilled that Wakefield’s art collection will receive this generous philanthropic gift.

“These are three major works of art that will find a perfect home for wide public appreciation and benefit.”

Arts minister Helen Whately said she was delighted that the three “brilliant” artworks would be enjoyed by hundreds of thousands of visitors each year.

The Cultural Gifts Scheme was launched by the Department for Digital, Culture, Media & Sport in 2013 and is administered by the Arts Council.

Donated pieces are allocated to public collections and in return donors receive a reduction in their income tax, capital gains tax or corporation tax liability, based on a set percentage of the value of the object they are donating — 30 per cent for individuals and 20 per cent for companies.