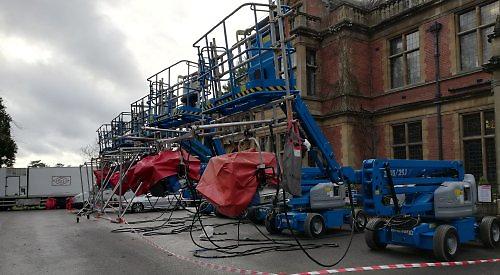 SCENES for a new science fiction television show were filmed at the Sue Ryder hospice in Nettlebed.

Joyce Grove will appear in The Nevers, which is written by American director Joss Whedon and will be broadcast next year.

A technical team from the Amrican production compnay HBO installed lighting and hydraulic platform lifts for use by the camera crew. Then members of the cast, which includes Laura Donnelly, Olivia Williams and James Norton, spent a day filming.

The show, which also features Hot Fuzz star Nick Frost, is about a group of Victorian women who are gifted with unusual abilities and find themselves tasked with a mission to save the world.

Posting on Twitter, HBO said the hospice would double as an orphanage run by Donnelly and Williams’ characters for children who have extraordinary powers.

The hospice regularly serves as a filming location. It doubled as Bletchley Park in The Imitation Game, a biography of the life of British codebreaker Alan Turing. It has also appeared in Agatha Christie’s Poirot, Jeeves and Wooster, Midsomer Murders and documentaries about James Bond author Ian Fleming.

Actor Martin Clunes filmed scenes for ITV drama Arthur and George at the hospice in 2014. The following year Nicholas Lyndhurst, Larry Lamb and Denis Lawson, who were filming BBC1’s New Tricks, took time out to meet and chat with patients.