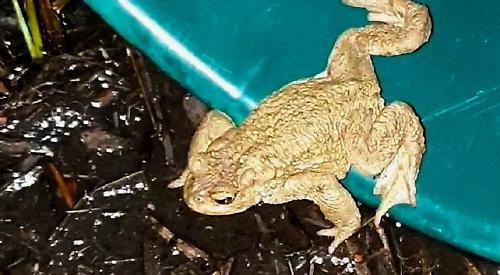 MEMBERS of the Henley Toad Patrol were caught on the hop when the amorous amphibians started to spawn earlier than usual.

Each year, the volunteers put up a 1km barrier along the edge of Marlow Road to prevent the toads being killed by vehicles as they migrate from Oaken Grove Wood to a pond in the grounds of Henley Business School on the other side of the road.

Thousands make the journey each year to spawn in the pond where they were born.

But this year, they began early so some toads were found dead on Thursday before the volunteers had installed the plastic barrier. For the next six weeks the patrol will visit the site at dusk, when the nocturnal toads gather, and collect them in buckets before carrying them across the road. About 100 have been saved so far.

The patrol has been operating since the Eighties and is given permission to build the barrier by the Culden Faw estate.

Co-ordinator Angelina Jones said: “Every year is different and it’s early days this year. The keen males are getting to the barrier early but the majority are still travelling through the wood.

“Last year we took nearly 7,000 across to the pond. The most we have ever carried in one season is 10,500. That was about six years ago. There are groups doing this all over but our particular toad patrol is the largest.”

The group has about 115 volunteers of whom 40 regularly take part and Miss Jones said people in Henley were very generous with their time.

“They realise it’s something on their doorstep that they can do pretty easily,” she said. “They can turn up with a bucket and maybe save 100 toads.

“It’s great to go to Costa Rica and tag turtles but this is on our doorstep and doesn’t cost anything.

“Toads are in trouble in this country, nationally and globally. People are filling in ponds and over-tidy their gardens. They also use slug pellets, which toads and frogs will eat. There are fewer natural places for them now. I’m very proud to be a part of Henley Toad Patrol group.”

All the toads are counted and the data is sent to Professor John Sumpter, head of ecology at Brunel University and a founding member of the patrol. He has collected the data annually since 1999 and it is also sent to conservation charity Froglife.

Miss Jones added: “Every year the numbers are different. He has got no idea why that is. There’s a lot that still isn’t known about amphibians.”

If you are interested in joining the toad patrol, email Miss Jones at amtjones@googlemail.com