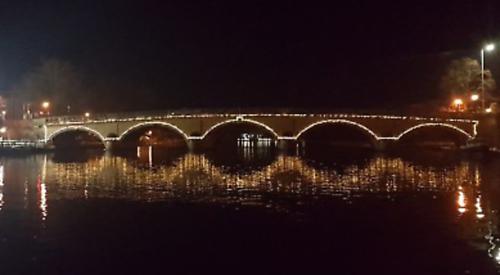 A HENLEY artist who attached lights to the town's historic bridge without permission more than two years ago has started taking them down.

Clive Hemsley, who lives in Hart Street, attached two strings of LEDs to each side of the Grade I listed crossing in February 2018 and later sought planning consent to make them a permanent feature.

Now he has given up on the idea after his proposal was rejected twice by Wokingham Borough Council, which has joint responsibility over the bridge with South Oxfordshire District Council.

More than 2,400 people signed a petition saying the lights should remain when he was first ordered to remove them but the planning authority sided with objectors, saying they could cause permanent damage.

This week Mr Hemsley began detaching a number of the lights, which were attached using a high-strength glue, where they could be reached by land from both banks. The rest will follow when he has access to a boat.

He says removing them caused no damage, proving it was safe to attach them in the first place.