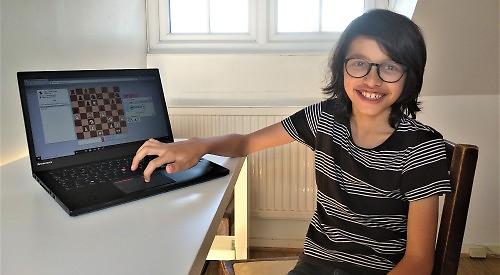 A BUDDING chess prodigy from Henley has been crowned top of his age group in a French national championship.

He won all nine of his games, which he played at home on his computer, over the course of a day so was the sole overall winner with most points. The event was broadcast live over the Twitch video streaming app.

Theo, who attends Valley Road Primary School, was interviewed by senior figures from the federation after his victory and has been told to expect a prize in the post.

The youngster, who lives with his parents Wadih and Jessamine and brother Alexandre, 12, began teaching himself the game in 2018 and soon discovered he had a talent for it.

Last year he won the under-nines age group at the British Chess Championships and went on to compete at the national final of the Delancey UK Schools Chess Challenge, finishing 11th.

He was due to compete in a face-to-face junior championship in May but it was called off because of the coronavirus outbreak and a virtual one was organised in its place. Theo was allowed to enter because he is a member of a French club.

Players had to sit alone in their rooms during games and judges watched them through their webcams to ensure there was no-one else giving them advice.

They played on a “virtual” board so they and their opponent could see each others’ moves in real-time and their facial reactions were broadcast to spectators.

They played in a “rapid” style in which players had limited time to make their moves in order to keep each match below one hour. Theo, who was among 206 players in his age group and almost 1,000 in total, was allowed a break between matches and his parents said he became increasingly excited as his winning streak built up.

His father said: “Between games he was allowed to switch the camera off and have a break so we made sure he had plenty of things to nibble on and took a little walk.

“He was probably among the top five to 10 seeds so initially he was up against easier opponents but it got harder and harder as the day went on. The first few wins were to be expected but as he continued winning, we had to keep reminding him to stay focused and not let it go to his head. At the end he was jumping and saying ‘I’ve won, I’ve won’.

“He’s very pleased to have won titles in England and France, especially as he was up against some strong opposition.

“Theo was glad to see all his effort had paid off – it goes to show that if you like something and work hard on it, then with a bit of luck you can achieve things.”

A face-to-face championship could still take place later in the year and Theo hopes to attend. He will also be competing in a 10-day event in Switzerland this week.

His ultimate goal is to win a match against a “grandmaster”, the highest title awarded to any player by the World Chess Federation.

Grandmasters often stage online training sessions playing against multiple children at once and, on one such occasion, Theo managed to achieve a draw.

Theo was introduced to the game aged four. He trains both by playing online and cracking chess puzzles where he must identify the best move in a given situation.

He is also a member of Maidenhead Chess Club and has lessons with Dino Sujoldzic, of Caversham.