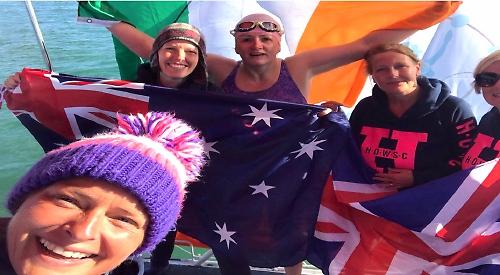 FIVE women have raised more than £25,000 for Henley Music School by crossing the English Channel in relay.

The Henley Mermaids set off from Dover at 11.30pm on Tuesday and they arrived at Cap Gris-Nez in northern France after 17 hours and 43 minutes.

They were due to take on the challenge in the first week of June, but it had to be postponed due to the coronavirus pandemic.

Mrs Reineke, the founder of Henley Music School, was the first swimmer out and described the experience as “wonderful, emotional, harrowing and horrific.”

“Thank you all for your lovely messages and support. I’ll read and re-read over the next few days. You kept us going when we doubted ourselves.”

They each had to swim for an hour in relay and the mermaids hoped to complete the 21-mile challenge in 16 to 18 hours.

The other four women travelled alongside in an escort boat, called Anastasia, which was being piloted by Eddie Spelling. It was a 42ft Dutch steel flybridge motorcruiser and there were on-board facilities for sleeping.

Mrs Reineke was followed by Mrs Robb, a Green Party councillor for South Oxfordshire, as she is the next strongest swimmer.

Third out of the boat is Mrs Print, a nurse, Mrs Barry, a teacher, and Mrs Fennelly, who is a sales director. Mrs Fennelly had the honour of completing the final leg of the journey.

They started out with a fundraising target of £6,000 for the music school, which was founded in 2010.

A full report and pictures of the challenge will be in next week’s Henley Standard.