I know the true beauty of Myanmar and its people 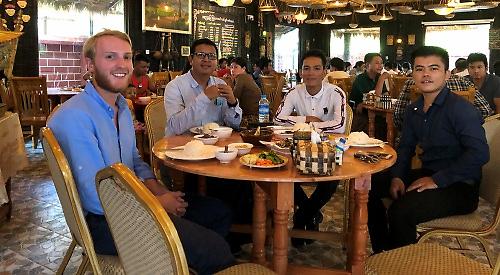 A MAN who grew up in Henley says he can’t wait to get back to Myanmar despite it now being under military rule.

Archie Moberly has lived and worked in the troubled country for the past two years and supports the daily protests against the coup.

He returned to the UK in April due to the emerging coronavirus pandemic, thinking he wouldn’t be here long, and hasn’t been able to fly back to south-east Asia.

Mr Moberly, 27, who is in business development, has continued to work online from his mother’s home in Checkendon.

He has also been keeping up to date with the news in Myanmar since the military overthrew the democratically elected government led by Aung San Suu Kyi on February 1.

Every day since then thousands of people have protested in the streets despite a ban on gatherings and fears that troops will be deployed.

The demonstrations are characterisedby a sense of fun, with young women wearing ballgowns and protestors carrying umbrellas to shield themselves from water cannons that have been used to disperse the crowds.

“Myanmar is a country of overwhelming peace,” said Mr Moberly. “The protests have been described as civil disobedience and it is beautiful to see. The people have been giving out flowers to policemen.

“In the cities they have been banging pots and pans for half an hour to warn off evil spirits and the country has this ‘come together’ spirit. I am speaking to friends and colleagues about what is happening when the internet has not been shut down by the military.”

As a child growing up in Hamilton Avenue, Henley, and then Nettlebed, Mr Moberly loved languages and the idea of travelling.

He attended Rupert House School before moving to Marlborough College in Wiltshire, where he took A-levels in Chinese, Russian, French and art.

He then went to Newcastle University where he earned a first class degree in Mandarin Chinese.

His course included a year in Shanghai as part of an exchange programme so he could practise the language and he fell in love with Asia.

Mr Moberly said: “It is such a different world and it made me think of how I approach people and talk to them.

“I loved the linguistic side of it and seeing the development of my language skills.

“Shanghai is such a fun city. It has incredible art and design fairs and I love photography. It was such an enriching experience and I had such an affinity with the place and its people.

“Afterwards it was all I could think about and I just wanted to get back to China but unfortunately they changed the visa regulations so I couldn’t get in.”

After graduating, he joined a headhunting firm and was based in Hong Kong, where he immersed himself in the culture.

Mr Moberly said: “It has wonderful food and people and is home to all walks of life.

“What I loved was the outdoor activities. It has beaches and mountains where you could walk up to watch the sunrise before work.”

After about two years he was moved to New York, which he says was “diverse” but was not for him so after a year in post he resigned in order to do something else.

He came home in June 2018 with the intention of taking the summer off and travelling in central Asia and he lined himself up with a job with a finance technology firm.

Two weeks before he was due to start, the company told him he would be based in Yangon, the largest city in Myanmar, which didn’t excite him initially.

Mr Moberly explained: “While I was working in Shanghai I did a bit of travelling and stopped off in Myanmar but didn’t think it was a place I wanted to live.

“But then I had a tourist mindset and the country doesn’t have a huge amount of accommodation that matches international standards and what is available is incredibly expensive.”

His company put him up in a shared flat round the corner from his office and he couldn’t believe his luck.

Mr Moberly said: “I shared it with another guy I worked with. It was exciting to be in a big apartment because where I lived in Hong Kong and New York was like the size of a bookcase.

“In Yangon there is a burgeoning middle class but the style and fixtures I had were different as they would never have access to a washing machine and things like that.”

A year later he joined his current employer, also based in Yangon, where he supports start-up businesses and entrepreneurs with funding.

He said: “I am still working on the markets in south-east Asia with a focus on Myanmar.

“They are six-and-a-half hours ahead so it doesn’t affect my day too much. In their afternoon it is my morning and I can do all my meetings on Zoom.”

The coup in Myanmar, formerly Burma, comes a decade after the military agreed to hand power to a civilian government following 50 years of rule by oppressive regimes. For the past five years, Suu Kyi and her once-banned National League for Democracy party led the country after being elected in 2015 in the freest and fairest vote seen in 25 years.

On February 1, the party should have begun its second term in office after easily winning an election in November with 80 per cent of the vote, even in the face of allegations of genocide against the country’s Rohingya muslims.

The military-backed opposition immediately made accusations of fraud after the vote and army chief Min Aung Hlaing assumed power for at least the next year. Mr Moberly said: “The rule of the military in Myanmar is well known and how it is involved in the running of the country and the treatment of the Rohingya muslims.

“But in terms of day-to-day you didn’t see or feel anything or get the military presence.

“We were told not to ask the locals about certain things like the Rohingya as it is a sore point and it is disrespectful to ask.”

He said the country had developed a form of democracy and an environment that encouraged the sort of start-ups and entrepreneurs which he is involved in.

Mr Moberly said: “For example, a sim card for a mobile phone six or seven years ago would cost you about £1,500, so only the military would have mobile phones. Now they cost £1.

“If you look to the older generation, they have seen some of the terror the military inflicted. The younger generation, like some of my friends who are in their thirties, have memories of blackouts and being told about areas of the country where they were not allowed to go. The younger ones have only known one way of living and are really not okay with the current situation.”

His friends have told him about their frustration at the military being back in charge of the country. Mr Moberly said: “There is a sense of fear and signs of anger and frustration as they are only 10 years into an alternative democracy.

“But the standard emotion is one of helplessness because you have to remember that the majority of the people there remember just how crap it was under military rule previously.

“I want to go back as soon as possible because I have my apartment and friends there. I am much enamoured by the country and for me it is home.”

For more information and to help, visit www.isupportmyanmar.com