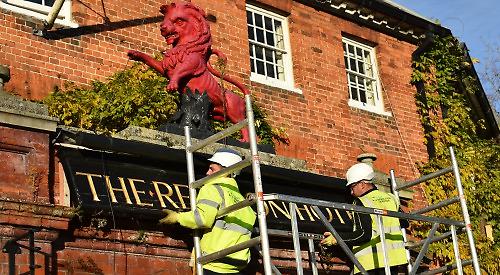 THE former Red Lion Hotel in Henley could keep traces of its old name when it re-opens under a new one.

The Grade II listed hotel at the foot of Hart Street is undergoing extensive refurbishment before re-opening in August as The Relais Henley, French for “coaching inn”.

Co-owner Grace Leo, who is seeking planning permission and listed building consent for new signage, has revised her application to include the old name on two parts of the building.

This follows a series of letters to the Henley Standard complaining that the new moniker doesn’s respect the site’s centuries of heritage, while Henley Town Council’s planning committee has called for the old hotel sign to remain in place alongside the new ones.

Ms Leo, an international who bought the premises from MG Hotels, is still proposing one large sign on the main face of the porte cochère, the covered red brick structure at the hotel’s main entrance, bearing the new name.

This would have gold capital letters on a dark blue background and would be illuminated at night.

She would also install two smaller signs on either side in the same style inscribed with “The Red Lion”.

These would also have the Relais logo, which features crossed rowing blades over a roundel with a water background, at either side.

Ms Leo is due to discuss the revisions with the council’s planning officers before they make a decision.

She said: “I hope this will address the concerns we’ve been hearing and will be considered acceptable to those who’ve raised them.

“This is a studied compromise which respects the building’s historic character while allowing us to advertise the new name, which is necessary for the viability of the business.

“We’ve taken heed of the points which have been raised in the Henley Standard and I hope this will help people to realise that the community’s views matter to us.”

Ms Leo will restore the old wooden sign which was taken down and is now in storage and will hang it prominently. She may also install display panels inside the building explaining its history. The red lion statue which is perched on top of the porte cochère will also be refurbished.

Ms Leo said the new name was needed to make the business stand out online from more than 600 other Red Lions in Britain as trade increasingly came from internet searches.

She said: “I’ve seen comments suggesting that it’s a ‘desecration’ of some kind, which was never our intention. We are running a business at the end of the day and while I understand there are strong feelings about this, it’s not the community which is investing in the hotel.

“A good name is critical because we’ll be offering something quite different from before. There are hundreds of Red Lions wherever you go and every time I see one, I take a photograph to prove that point.

“There’s also an affordable hotel chain with that name in America whereas we are upmarket and want to welcome people with more demanding tastes.”

Ms Leo’s architect Nicholas de Klerk said: “Historically, this has always been a living, breathing commercial site — the building itself is historic but it’s not a museum.

“We’re respecting its fabric and have worked very closely with the planning authority.

“While the Red Lion name has existed for a long time, the value is in the building itself and the continuing commercial usage will ensure it survives.”

Geoff Luckett, chairman of the Henley Society, said: “I suppose it’s an acceptable compromise. Ms Leo is the owner and can do what she likes but we’ve always had a strong feeling that the Red Lion name should be retained somewhere.

“This is not a perfect solution but I’m far happier knowing the old name will be visible approaching the building from Hart Street or coming over Henley Bridge.”

The Red Lion at Henley has existed for almost 500 years and previous guests include King Charles I, Prince Rupert, Samuel Johnson, King George III and IV and possibly Oliver Cromwell.