It’s good to be here (finally) 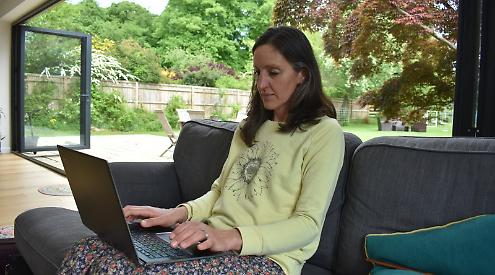 A UKRAINIAN family have finally arrived in South Oxfordshire after waiting almost two months for visas.

Anna Goldenberg, 37, and her children Mariia and Mark were welcomed to Swanston Field, Whitchurch, on Saturday evening by their host Judi Green and her family.

Mrs Green, a teacher, who applied to sponsor the family on March 22, had almost given up hope of the family being allowed into Britain, as reported in last week’s Henley Standard.

But they were finally granted their visas late last week and travelled here from Poland, where they had been staying in a hostel after fleeing Ukraine in March, leaving behind Mrs Goldenberg’s husband Oleg, 39. He is now helping to provide humanitarian aid on the front line.

A friend from Reading had told the family about the UK sponsorship scheme and put them in contact with Mrs Green, who had registered her interest in helping Ukrainians.

Mark, six, went to school for the first time at Whitchurch primary on Tuesday after being given a uniform by one of Mrs Green’s neighbours.

His mother said he was looking forward to making friends but was worried about his English.

Mrs Green, 45, and her husband Matt, 45, have two other children, May, 15, and Jennifer, 11. Mrs Goldenberg, who was an art teacher in Ukraine, said she was grateful to the Greens and to the British people for welcoming Ukrainians and ensuring their safety.

She said that finally being here was like something out of a fairy tale.

“English culture is inside our hearts,” she said. “We have always listened to British music — I came in a Rolling Stones T-shirt. We’ve read books from English authors — it’s a part of our childhood.

“We love English films and tea with milk and oats for breakfast like in Sherlock Holmes. The Beatles is our favourite band. My grandfather knows all their songs. The nature here is beautiful. It’s different than in Ukraine. The grass is greener here — literally.”

The family had a stroll by the River Thames on Sunday, which Mrs Goldenberg said reminded her of the English textbooks they used in school in Ukraine.

She said she and the children had felt lonely over the past eight weeks in Warsaw, having driven there from their home in the countryside near the capital, Kyiv.

The drive out of Ukraine was like a war film with dead animals in the streets and lots of people with guns, she said.

They stayed at a friend’s house for two-and-a-half weeks, thinking they would be granted visas quickly but then had to move to the hostel. Mrs Goldenberg said: “The shelter wasn’t for living. The water tasted like metal, it was so cold and the kitchen was really small.”

They went to the visa centre in Warsaw five times to try to find out what the delay was but nobody knew how to help.

Mrs Goldenberg was able to find a few small jobs as a photographer to make some money but this meant the children couldn’t leave their hostel room or even open the door to anyone while she was out.

She said: “I was scared and worried at first about the other people in the hostel. There were men staying there and I have a 13-year-old daughter and a small boy but then we learned they were good people.

“We became a community in the hostel — people would knock on the door and offer us dishes, offer us borscht soup. We would get together and tell stories.

“The men, old and young, worked so hard all day — they would leave really early in the morning and get back really late at night after doing building work.”

Mrs Goldenberg hated the fact that her children weren’t at school learning and mixing with other children.

She would do maths with them, read books and draw with them on the walls of the hostel room.

Mrs Goldenberg said: “Maybe the drawings will give the next refugees that stay in the room some happiness and some hope.” She tried to keep her children occupied by visiting the museums in Warsaw on the one day of the week that admission was free.

She said the museums were “super” and very good for her children but they did also have some negative experiences.

Mrs Goldenberg said: “It was my mistake going to the war museum. It had interactive areas and when there were sounds of bombs, it scared my children.

“There was also the museum of money where one guy rang a bell and it made Mariia have a panic attack. She cried for 15 minutes.”

When the visas came through for the children, Mrs Goldenberg didn’t think it was real.

She said: “I didn’t believe it. I’d lost the hope that we would come here. I had a dead feeling inside.” Now the family are in the process of filling out more forms and Mrs Goldenberg hopes to find a job.

Mrs Green said: “I’m so relieved and grateful to everyone who helped make this happen.

“I really felt like I’d let them down. It was breaking my heart that I couldn’t get them here and I’m so glad they’re out of that hostel now and safe here with us.

“The kids get on so well and it’s great that Mariia and Mark can start at their new schools and settle in.

“There’s a lot of paperwork to fill out and things to do but the main thing is they’re here.”