A RANGE of characters was featured in Sonnings seventh biannual scarecrow trail held over the bank holiday weekend.

Thousands of visitors descended on the village on Sunday and Monday to view about 60 scarecrows made by residents and placed outside their homes.

The creations included the Cruella de Vil and the 101 damlations, the Red Baron, Spiderman, Superman and Iron Man and characters from TV and childrens films.

Click here to view our picture gallery of some of these.

Barbara Carr, of the Sonning village scarecrow and open gardens committee, said: People work on them for several weeks beforehand and a considerable amount of thought goes into some of them.

Im quite impressed with the way visitors get behind it  they come from all over the place.

The weather wasnt very good on Monday but it didnt seem to stop people coming and we had almost as many as we did when it was brilliant sunshine on Sunday.

Christine Sandalls Gone Fishing scarecrow outside her Thames Street home was of her husband John.

He just walks down the road and goes fishing off the wharf, she said. 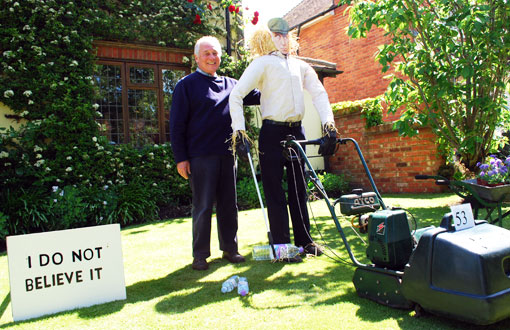 Sidney Liddiard made a Victor Meldrew-themed scarecrow called The Gardener outside his Pound Lane home.

He said: I do some work up at the recreation ground and Im forever picking up bits of litter. Its a beautiful village and we want to keep it that way.

Asked if the character was supposed to be him, Mr Liddiard said: Certain people think it might be!

John Hicks, of Thame Street, created TVs Del Boy and Rodney and said: We have done one every year since the trail started.

The event also featured four open gardens, a plant sale, a Punch and Judy show in the High Street and hand bells in St Andrews Church.

The proceeds will go towards village amenities.