A PUB celebrated multicultural Britain with its own twist on a long-forgotten tradition.

The Plowden Arms in Reading Road, Shiplake, held its second annual Empire Day on Saturday with live music, entertainment and food and drink.

Click here to view our picture gallery of the event.

Landlady Ruth Peters said: Were really known for all things old-fashioned and British. We were looking for an event to do that was family friendly and lively and that had a bit of history to it.

Empire Day started in 1902, a year after Queen Victorias death.

The purpose was to remind children that they formed part of the British Empire and that its strength depended on them.

By the Fifties, however, the Empire had started to decline and relationships with Empire countries had changed as they began to celebrate their own identities and soon Empire Day was no longer celebrated.

The pubs event was more about recognising multiculturalism and it invited the Reading All Steel Percussion Orchestra, who performed last year, back again. Their repertoire included everything from Michael Jackson to Beethoven.

Rob Heron and the Tea Pad Orchestra performed a mix of western swing, blues, gypsy jazz and country while the Ellington Morris dancers, from Maidenhead, added a touch of quintessential May tradition to the day.

Refreshments included a slow-roasted hog from the Black Pig in Watlington, a West Indian-themed barbecue, cream teas and an outdoor bar. 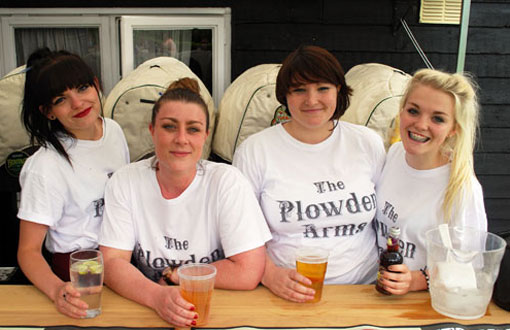