A WOMAN has given a kitten a home  after it kept her awake for hours and then got lost under her floorboards.

PR consultant Hannah Wilson was asleep at her home in Kings Road, Henley, when she was woken up at about 4am on Saturday by the sound of miaowing coming from outside.

The noise kept her awake until 8am when she got up and went to investigate with her nine-year-old son Roman. They found the five-week-old female grey tabby stuck under a wheel arch of a BMW.

Miss Wilson, 41, said: I knocked on my neighbours doors at about 9.30am and asked if they could help. We jacked up the car and the kitten fell out.

Chris Baird, who was among the families who helped, said: We found that the kitten was stuck by the suspension spring and when the jack lifted the car it fell out but then ran underneath six parked cars and jumped under another BMW and got stuck in the same place. It clearly has a thing for German estate cars.

The kitten was finally freed from the second car and Miss Wilson took it inside and put it in her bedroom, away from her two other cats, Hudson, 15, and Boris, four.

However, there was more drama on Monday when the kitten went missing again. Miss Wilson called friends round to help her look for it before realising it had gone down a hole in the floor underneath her wardrobe.

After failing to coax it out, she contacted bespoke furniture maker Ian Desmond to come round and lift the floorboards. However, while he went to fetch his tools, the kitten made its own way out.

Miss Wilson took the animal to the Henley Veterinary Centre in Reading Road to be checked over. She said: I will look after her until someone claims her but I am a cat person and would be happy to keep her.

At her sons suggestion, she has named the kitten Clementine. 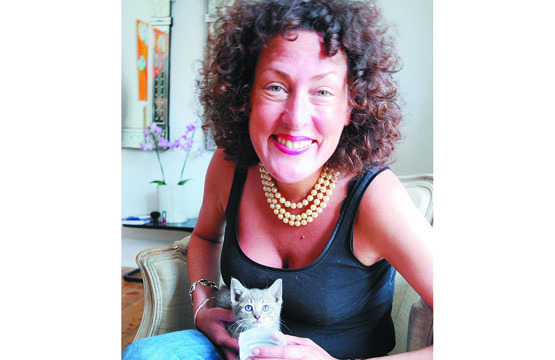