THE swan population on the Thames has not been badly affected by the winter floods.

Many cygnets died after being washed over weirs in the strong currents while others fell victim to dog attacks and shootings.

But the overall number is thought to be on a par with last year, according to the Queens swan marker David Barber, who led the swan upping ceremony this week.

The annual census of swans on the river, a tradition that dates back to the 12th century, takes place from Sunbury-on-Thames to Abingdon over five days each July.

The young birds are rounded up, caught, marked and then released.

The Henley Standard joined Mr Barber on the stretch of river between Hambleden Lock and Henley. He and his team caught, weighed and measured five cygnets before checking their condition, which included looking for any fishing tackle injuries.

Catching the birds was the hard part, with one man almost ending up in the river and ducks and geese caught up in the melée being ushered out of the way.

Each cygnets head was measured to give an indication of its growth rate. Mr Barber said: The number of young cygnets is just about on par with last year.

Were pleased because we had a lot of problems with the floods early in the season with a strong stream. A lot of cygnets got washed over weirs. We have had an awful lot of dog attacks and shootings this year as well.

There have been reports of many successful breeding pairs with larger broods than normal, which is extremely positive news after several years of decreasing cygnet numbers.

However, these very young cygnets are extremely vulnerable to natural predators and the resulting brood numbers may be smaller than anticipated.

The swan uppers counted 30 cygnets on Monday, 39 on Tuesday and 14 before arriving at Hambleden Lock at lunchtime on Wednesday. 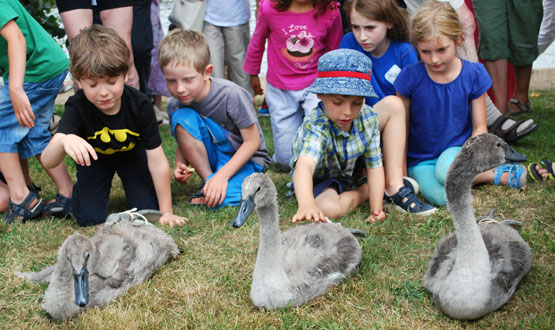 Children were able to get up close to the cygnets and learn more about the birds from the experts.

In Henley, Mr Barber gave a talk to children at the River and Rowing Museum about swan upping, the birds, the river, the boats and locks he travels through each year.

He has been the royal swan marker since 1993 and said he still enjoyed the job as much as when he first started, particularly the educational side and getting children involved.

Mr Barber was made a Member of the Royal Victorian Order in the New Year Honours.

The Crown retains the right of ownership of all unmarked mute swans in open water but the Queen mainly exercises this right on certain stretches of the Thames and its surrounding tributaries.

This ownership is shared with the Vintners and Dyers Livery Companies which were granted rights of ownership by the Crown in the 15th century. The swan uppers use six traditional Thames rowing skiffs during their annual voyage upstream.

Click here to view our picture gallery of the birds and the watermen.