Dog gets stuck in cat flap

THIS is Narla, the dog that thought she was a cat! 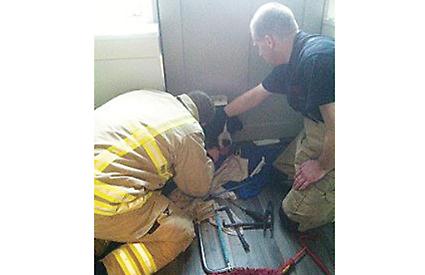 THIS is Narla, the dog that thought she was a cat!

The 15-month-old Bernese mountain dog got stuck in the cat flap at her home in Northend and firefighters had to be called in to free her.

They used a hacksaw blade to cut off the cat flap surround after an attempt to slip Narla out using olive oil failed.

However, the 77lb dog was none the worse for her ordeal, which happened on January 2 as her owners Rick and Nicola Scannell visiting family in Hong Kong with their two children.

Narla, who is 3ft tall, was being looked after by house- sitter Sally Milo when she discovered the dog with her head through the flap from outside the house. 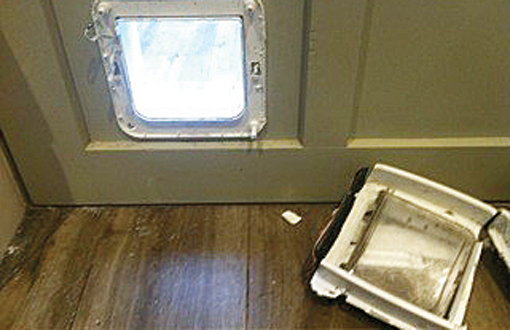 She tried unsuccessfully to pull the dog out before summoning help and also called Mr Scannell to tell him what had happened.

He said: “We knew how small the cat flap is and we were amazed Narla had got herself stuck in there. We were worried because we thought she might panic and hurt herself. Sally tried to get her out before calling the fire service but it really needed two people, one to push and one to pull.

“Olive oil and butter all over the cat flap but they couldn’t squeeze her out.’

Three firefighters from Henley were called in to help. Alastair Letchford and Paul Herrington were on the inside carefully cutting into the cat flap while Ian Birch was on the outside helping to keep Narla calm.

A vet from the Henley Veterinary Centre and an were also present. The operation to free her took about half an hour.

Mr Herrington said: “There was butter and olive oil all over the place which they had used to try to free her but she was well and truly stuck.

“We had to be very careful as she was a bit distressed.’

Once Narla was free, Ms Milo called Hong Kong again to deliver the good news. Mr Scannell, 55, said he and his wife, who visiting her family, had kept the news from their children, Oscar, seven, and Isobel, until they knew Narla was all right.

“I didn’t think they would like the thought of her being cut out,’ he said. “Then when I told my eldest he joked about hoping they didn’t have to cut her head off!’

The family, who moved to Northend in March, came home on Sunday morning after flying into Heathrow airport.

Mr Scannell and his wife tried to sneak their children into bed without waking Narla and their other dog Marlee, a golden retriever, but the dogs started barking.

Mr Scannell, a former barrister who is now a property developer, said: “I was trying to be quiet so we could get the kids to sleep.

“We went straight upstairs but the dogs heard us. They seemed pleased to see us, particularly Narla.’

The couple got Narla from Poland when she was four months old with the help of a builder friend.

Mr Scannell said: “We told him about how difficult it was to get a Bernese in the UK.’

They chose her from a litter after seeing videos and photographs. The family also has three cats, Tinga, Midnight and Tiddles, and three chinchillas.

Bernese mountain dogs continue to grow until they are two or three years old.

Mr Scannell said: “At the moment Narla is quite big but after a you get used to the size. When we first got her she was a bit smaller than Marlee but she’s bigger now. We’ve trained her ourselves using a click and reward system. She’s a great dog, very obedient and lovely.

“She will bark if someone comes towards the house and she is very good with the kids.’

Mr Scannell, who rented a house in New Street, Henley, while renovating the family’s new home, thanked everyone who helped in the rescue.

He said: “I think it’s wonderful we are able to call on the emergency services for an animal.

“An animal expert from Amersham was part of the team so he had come a really long way. He was specifically there because it was an animal involved. I was hugely impressed.’

And Narla? “I’ve decided to treat her and take her to a grooming parlour for a good bath,’ added Mr Scannell.