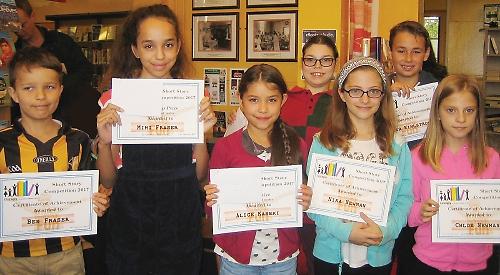 The Friends of Sonning Common Library organised a short story competition for children as part of National Libraries Week.

The winner of the 16 and under category was Isabelle Chandler with her story “Tag” and the runner-up was Mimi Fraser who wrote “Hair from Hell”.

The 11 and under category was won by Alice Kaseki with a story called “The Magic Book” and the runner-up was Amelie with “Travel in Time to Where”.

The winner of the under sevens category was Shriyaans Aravind with his story “Mini Men”.

In the special the winner was Judith Stickings with her story “Elmo in Shotover Class” and the runner-up was Angel Munakarmi with “Splash”.

Certificates of achievement were awarded to all the entrants.

Jill Hutchinson, who chairs the Friends, praised all children and thanked the competition sponsor, Bewley Homes, Peppard Building Supplies and Sonning Common Vauxhall for their support.