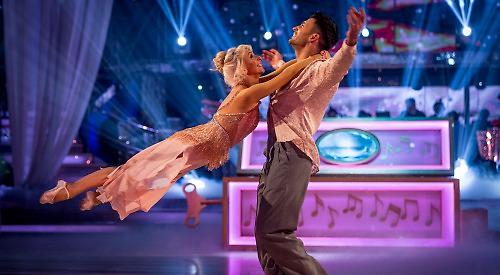 DEBBIE McGEE says taking part in this year’s Strictly Come Dancing has given her a new lease of life.

The radio presenter from Wargrave narrowly missed out on lifting the famous glitterball trophy after each of the four finalists performed three dances on Saturday night’s live BBC1 show.

But McGee, 59, insisted that it was the taking part that counted and that all she wanted was to have a good time.

McGee said she and the two other celebrity contestants, singer Alexandra Burke and actress Gemma Atkinson, all felt they had won just by being in the final and the result didn’t matter.

She joked on her BBC Berkshire radio show that the trophy was merely “something to dust”.

For the final, each couple had to perform a dance routine which they had done earlier in the series and was chosen for them by the judges.

McGee and her professional partner Giovanni Pernice were given the salsa for which they were previously given 35 points out of 40 by the judges after McGee made some mistakes as she was recovering from a pulled muscle.

This time, the couple were awarded 39 points with only judge Craig Revel Horwood not giving them the maximum 10.

Bruno Tonioli said: “You’ve got be kidding me, Debbie! She’s like the Tardis. She defies all the laws of physics and the concept of time. You danced like a 20-year-old — brilliant.”

Darcy Bussell said she couldn’t work out how McGee managed to keep a smile on her face as she was being lifted upside down, adding: “I just want to bottle a little bit of Debbie McGee.”

Head judge Shirley Ballas said: “It was fantastic, well done. We all agree that you are the brilliant, Debbie McGee.”

Revel Horwood was booed by the studio audience when the scores were revealed and Bussell could be seen telling him off.

The couple returned to the floor for their show dance, which contained a mix of steps from different styles.

McGee was dressed as a ballerina, a nod to her younger days, and the routine began with her on top of a wind-up music box.

The routine was both in and out of hold and was full of lifts, including one where she clung on to Pernice’s neck as he rotated. She also did the splits. Ballas gave the couple a standing ovation, saying: “This show dance shows your growth and how far you’ve come from the beginning.

“What I love is at the beginning of the season you dared to dream and look at you here in this final. Your dreams have truly come true.

“I’m sure everybody outside would love to put you in a little box and take you home with them and just watch you sparkle every week. It was amazing.”

Tonioli then said: “You were flying like an angelic ballerina. Like every little girl has a dream that one day they become this beautiful creature, dancing, moving beautifully. You just did that — you are the dream, darling.”

Revel Horwood said: “I thought you pulled it off really, really well actually.” He and Bussell awarded the couple nine points while Ballas and Tonioli each gave them 10.

Before their final dance, the couple told viewers how much competing had meant to them. McGee, the widow of magician Paul Daniels, said: “It’s 100 times better than I could have possibly imagined, particularly working with Giovanni. We have laughed every single day and it’s a great feeling to have a friend that you can say anything to and also that they laugh at your jokes.

“We have had so many amazing moments where the judges’ comments have just completely taken me by surprise. This is just the cherry on the cake.

“After I lost Paul, I lost a lot of confidence so Giovanni has given me back that confidence that I can do it on my own and that I’m actually okay. I will always look back on Strictly with very, very happy memories.”

Pernice said he was delighted to be partnered with Debbie, adding: “She is an amazing person and friend. I have had the best time of my life.”

She then received good luck messages from James Phelan, her nephew, Emma and Amanda Gilmore, her goddaughter and friend, her sister Donna Phelan and her mother Babs McGee.

The couple then performed the Argentinian tango as their final dance and were awarded a maximum of 40 points by the judges.

Tonioli called their performance “sublime”, adding: “You really have exceeded my expectations week after week after week and you have been such a source of inspiration for me and millions of people out there who say, ‘you know, you get to a certain age and you’re history’. Well, you’re not — you’re getting better!” Revel Horwood said: “I absolutely totally agree with Bruno. This is not the end of anything for you, my darling, it’s a new beginning. It is just stunning watching you.”

Speaking to Andrew Peach, who was hosting her Sunday radio show, McGee said she had loved every moment of the series.

She said: “It was a very long party that was coming to an end yesterday. We were all buzzing and it was exciting and you really felt a sense of achievement, the four of us that got through to the final, including our partners.

“It is a huge thing to get through to the final of Strictly and for me, carrying this flag for everyone over 50. All four of us felt that just getting to the final we’d won. It really didn’t matter who won the glitterball. Someone’s got something to dust.

“I loved the programme and I love music and dance. My main reason for doing it was because I wanted to have a good time so I think that’s what kind of showed the whole way through the series.

“At my age, it’s fantastic to have been given this new lease of life.”

McGee is now performing in pantomime in York and will be going on a Strictly tour.

She said: “Wow, aren’t I a lucky girl? I’ve had the most phenomenal time.”