Moving May Fayre is a winner 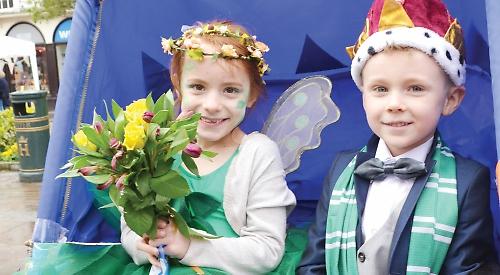 ORGANISERS have hailed the revamped Henley May fayre a success.

Hundreds of people flocked to the town centre on bank holiday Monday despite the cool, overcast conditions and occasional showers.

Market Place was closed to traffic to allow people to watch performers and wander between the stalls run by charities and community groups.

It was the first time the event had been held in the town centre for more than 30 years, having been moved from Mill Meadows when the town council took over the organisation from Henley Round Table.

Organiser Sarah Miller, a town councillor, said: “I think it went really well. You can see from the number of people that turned up. The whole thing was great and I am delighted.”

The fayre was opened by Mayor Julian Brookes at 11.55am and the afternoon was compared by fellow town councillor Stefan Gawrysiak.

The performers included members of Steph’s Dancing Divas and Dudes who danced around a Maypole topped with flowers.

They were led through a series of routines by Anne Garrison, a Maypole dancing tutor.

As they danced the crowd cheered and clapped — even when hailstones began falling. Some spectators moved to covered areas to keep dry.

Mrs Garrison, who built the Maypole herself, said: “The girls did really well they’d only had one practice session — they did excellently.

“Because it’s my living I would say there is not enough Maypole dancing in the world. We should keep these traditions going because they’re important.”

The dancers, who are co-ordinated by Steph Maxwell, of Newtown Gardens, Henley, also performed some of their own routines later in the afternoon.

After the Maypole the judging of the May King and Queen took place.

About a dozen children had entered the competition and lined up in costumes, including princesses, cowgirls, insects and a knight.

The competition was judged by health and fitness expert Angie Best, from Medmenham.

She asked each entrant their names and about their attire.

Ms Best said: “They all looked so beautiful. We had only a few boys but all the kids looked gorgeous. I particularly liked the May fairy — she was fabulous.”

The May King was Ethan Procter, seven, who wore a white shirt, grey trousers, grey waistcoat, blue jacket and bow-tie. He also had a walking stick and a green scarf.

The Queen was six-year-old Ada Stevens-Sly, who had come as a flower fairy wearing a green outfit with wings and carrying a bouquet of flowers.

Both children were given crowns to wear and taken on a ride around the town centre in a rickshaw.

Ada’s outfit was made the night before by her mother Pru Sly, of Northfield End, Henley.

She said: “I looked on Pinterest to see what a May fayre costume should look like. There were a lot of greens so she was a flower fairy.

“I love the event being back in the town centre. When they closed the road it created a space that should be used for other community initiatives.”

Throughout the afternoon members of Henley in Transition were giving out bean seeds to children.

The environmental campaign group is running a competition to see who can grow the biggest green bean, with a prize of a £10 book token for the winner.

Dave McEwen, a member of the group, said: “We want to encourage people to grow their own.”

Members of HOT (Henley) WI had a cake stall and the 1st Henley scouts ran a home-made slot machine.

The Henley 60+ Club had a flea market, which raised more than £200. Throughout the afternoon there were also performances by Springbox Gymnastics Club and Henley singer Georgia Michel, who sang acoustic versions of Britney  Toxic and Jolene by Dolly Parton.

Ellington Morris, a Morris dancing group from Maidenhead, performed several dances, including Cotswold and Border dances, named after the areas where they began.

Bob Spooner, for the group, said: “I like that the event has moved into the town centre. I think it works really well.

“At first I was dubious because I don’t like change as I am old but I actually really like it. There a good audience and a really good buzz.”

The Morris dancing was followed by a tug of war contest featuring the Row Barge “juice monkeys”, the Argyll “heavyweights” and the Henley Hawks women with a few of the men’s first team players helping out.

Then the team from the Argyll in Market Place beat the rugby players.

Every single contest was won by the team pulling downhill.

At the end of each the teams were cheered and applauded for their efforts.

The afternoon closed with a performance by Sam Brown’s Ukulele Orchestra.

Councillor Miller said the attendance vindicated the decision to move the event back to the town centre.

She said: “I think it showed how keen everyone was for it to be in the town centre.

“When it was in Mill Meadows, I don’t think the attendance was anywhere near what we had this time.

“There were a lot of people in Henley not for the fayre who realised it was good to stick around for the afternoon.

“Of course it rained, as it does on May bank holidays, but because the fayre was in the town centre people went into the shops, cafés and restaurants.

“The event is for the town and we hope to do it again next year.”

Cllr Miller said they would welcome positive and negative feedback to help shape next year’s event.

“There are a few things we want to do slightly differently, perhaps by offering some fast food and including a stage,” she said.

“I was aware, because there were so many people, that it was hard to see the acts and know there were issues with parking and traffic.”

Town manager Helen Barnett said: “I have been round the shops and they were either overjoyed or takings or at the very least equal.

“A couple of the retailers were not open because of the bank holiday but everyone seemed keen on the event.

“From a town point of view, it was wonderful to have the fayre in the centre  to help drive footfall and everyone had a lovely time.”

If you want to provide feedback, email henleymayfair@yahoo.com

See the full gallery of photos here: May Fayre 2017