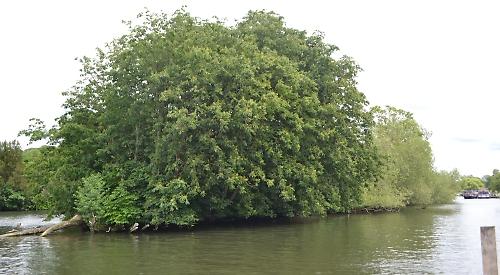 AN island on the Thames in Henley may be taken over by the town council as it is not being maintained properly.

East Eyot, a narrow strip of land covered in trees near Mill Meadows, is registered to a company in Liechtenstein.

But the council says it is in a state of disrepair so it could attempt to claim ownership in order to tidy it up.

The issue was raised at a meeting of the council’s finance strategy and management committee by Mayor Kellie Hinton who said her partner Ben Hinton began investigating ownership of the island six years ago.

She said: “He felt the island was in disrepair and people were using it for free mooring. It is now damaged almost beyond repair.

“My partner and one of his associates instructed lawyers to find out who the owners of the island were so they could try to contact them, with no success. The town council has made several attempts to contact the owners with no result. The solicitors for the owners are based in London.”

The Mayor said she had contacted the Environment Agency, which is responsible for the river, but officials had been “less then helpful”.

“They dismissed all knowledge of ownership or anything to do with it,” she said.

Councillor Hinton said she thought the council could make better use of the land.

“Maybe we have the authority to take ownership for whatever reason and use it as a nature reserve or something similar,” she said.

Town clerk Janet Wheeler said the council could try to claim ownership if the island was not being properly maintained.

She said: “If there are no receipts or evidence of the owners doing any work or actually managing the land then that could be taken into account.”

Councillor Ian Reissmann said: “This should be a major concern if the land is becoming in a poor state of repair.

“This should be a serious matter for the Environment Agency. Any land they are aware of not being maintained could be a risk to the environment, not just the island but the river itself.

“The council could write to them expressing its concerns. It is a problem for the town and the people in the area.

“There is a need for proper maintenance and it seems to be difficult to track these people down.

“I would expect the Environment Agency to make a more considered response.”

Councillor Jane Smewing said a lack of maintenance could affect other eyots along the Thames.

She said: “There have been islands effectively washed away further upstream. It’s worth contacting the Environment Agency and writing to the owners and to do as much as we can.”

Councillor Will Hamilton said he was concerned about people mooring on the island.

“There are already three or four boats on it and they could claim ownership of it,” he said.

“I think we should continue to look into it and see whether it could become a town council asset.”

The council will also contact the River Thames Alliance, a not-for-profit company dedicated to improving, protecting, promoting and enhancing access, safety, fun, education, information and the livelihoods of all those associated with the Thames.

East Eyot used to be known as Corporation Island and was owned by the council until 1907 when it was sold.