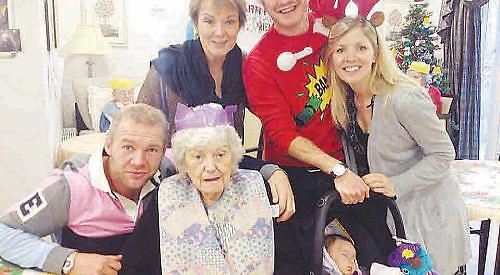 A WOMAN has spoken of her joy after the stolen bench bought in memory of her mother was replaced.

Tracey Outram-Phillips, 58, of Fair Mile, Henley, spent £1,000 on the wooden bench near her home following the death of 87-year-old Audrey Skinner in 2013.

But in January the bench went missing along with two others nearby. They are all thought to have been stolen.

Mrs Outram-Phillips, a psychotherapist, complained to the town council with which she had arranged to have her bench installed in the first place.

At the time, town clerk Janet Wheeler told the Henley Standard that she had not been contacted directly about the benches but the case was taken up by Conservative councillor Will Hamilton.

Now a new bench has been installed and fixed to the ground so that it can’t be stolen.

Mrs Outram-Phillips said: “We got the ball rolling and the council picked it up once the story was in the paper. I wasn’t told it had been replaced — I drove past and saw it there and thought, ‘oh my God, they’ve installed another one’. It took a while but it’s back now.”

Mrs Skinner was a resident of the Acacia Lodge care home in Quebec Road and suffered from vascular dementia. Her daughter chose the location for the bench, which is set back from the road, as it was a spot beloved by her mother when they went for a walk in Fair Mile.

The bench included an inscription which read: “In memory of Audrey Skinner. Rest a while, Pause for Thought. Enjoy Life.” The replacement has the same words.

Mrs Outram-Phillips said: “It looks lovely and they even did the inscription. I’m very grateful to the town council for doing it and I’ve emailed them saying ‘thank you’. I’m sure it’s the least of their issues but I’m grateful they followed up on it.”

Mrs Outram-Phillips has visited the new bench with her family to reminisce about Mrs Skinner, just as she used to with the original one.

Her elder son Ollie, 34, is a former professional rugby player and a director of PwC and her younger son, Adam, 32, is a company director, who is married with two young children. Mrs Outram-Phillips said: “We went back as a family and had a little celebration. It’s a lovely place to sit, especially at this time of year.”

The new bench cost about £800, including the carved inscription.

Councillor Hamilton said: “I’m very pleased it has been replaced and thank you to Liz Jones and Helen Barnett at the town council for working quickly on this.”