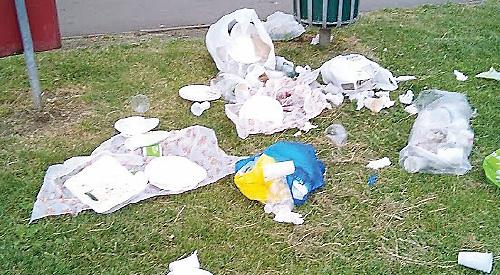 A CONTRACTOR has been employed to clear trade waste in Henley and keep the town looking its best over the summer.

The move has been made by the town council after members complained about piles of blue bin bags from shops and cafés being piled up in the town centre in the run-up to Henley Royal Regatta and Henley Festival.

This came after Grundon, one of the contractors used by businesses in the town, changed its evening collections to mornings unexpectedly.

Councillors demanded immediate action, saying that the problem would damage the town’s the night-time economy.

Councillor Stefan Gawrysiak, a member of the ruling Henley Residents’ Group on the town council, said the contractor, GT Can Do, of Henley, had now been employed on a temporary basis until a permanent solution was found.

He said: “We have told businesses to put their rubbish out between 5.30pm and 6pm and the bags will be collected. This will happen every day for the next few weeks, including Fridays, Saturdays and Sundays.”

When Cllr Gawrysiak was mayor in 2013/14, he brokered a deal with contractors to collect business waste in the evenings instead of the early morning.

He said this arrangement worked very well until Grundon’s decision to revert back to the old system about three weeks ago.

Biffa, another contractor which picks up trade waste in the town, says it has not made any changes to its collections. Cllr Gawrysiak said the council had a “constructive” meeting with Grundon officials on Monday.

“We have agreed to this temporary fix and we will have another meeting in two weeks when we will come up with a permanent solution,” he said.

“We will also be meeting with South Oxfordshire District Council to come up with a permanent solution to problems with street cleaning and removal of waste from litter bins.” Last week, the Henley Standard reported how piles of bags were left in Market Place and Friday Street.

Councillor Ken Arlett said he wanted to know why the contractor had changed its collection times.

Earlier this week, councillors resorted to political point-scoring on social media about the problem.

Conservative Will Hamilton tweeted a picture of rubbish in Market Place, saying: “This is what happens when you let HRG run the town, little communication with South Oxfordshire District Council and big piles of rubbish.”

Mayor Kellie Hinton, a member of HRG , responded to a similar post by Councillor Hamilton on Facebook, saying: “Look at the lies and spreading of misinformation by this councillor. Clearly not true.”

She said the efforts to solve the problem had been cross-party but Cllr Hamilton had failed to mention this.

Cllr Hamilton said he was not point-scoring and that all councillors loved the town.

l This week residents have also flagged up problems with littering in Mill Meadows and overflowing bins in Tuns Lane.