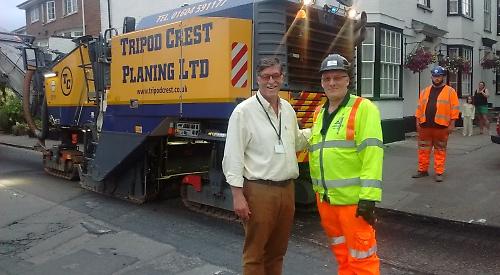 A SECTION of a busy Henley road has been resurfaced and more repairs have been scheduled for other areas of town.

The work at the bottom of King’s Road was carried out during the night of Friday, June 23 to keep disruption to residents to a minimum.

The Oxfordshire County Council contractor began ripping up the road at 8pm and had finished all the “noisy” work by 9.30pm.

Tarmac was then laid and left to set before all the road markings were done. All the work was completed by 1am.

Stefan Gawrysiak, the county councillor for Henley, said: “That is the way to do repairs in Henley, unlike what happened in Hart Street that just messed up the whole of Henley for four days.”

In April, Hart Street was closed for four days after “defects” were found in a sewage pipe during routine work by Thames Water contractors, causing long tailbacks and congestion throughout the town and beyond.

Cllr Gawrysiak, who was elected to the county council in May, said he was now working on a plan to fix potholes, repaint white lines and clean street signs.

He has already earmarked Harpsden Road and Hop Gardens for repairs in August and September respectively.

Cllr Gawrysiak said: “The county council has already committed to 10 days worth of pothole filling. We will get things done before winter.”