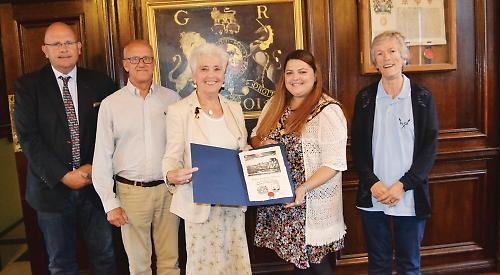 A SCROLL from one of Henley’s twinned towns has been presented to the town council.

Janez Fajfar, the Mayor of the Slovenian town of Bled, created the decorative parchment in the printing room at the town’s castle.

It shows a landscape image of the Bled and includes both towns’ coats of arms.

He was helped by Judy Whittaker, of Lambridge Wood Road, Henley, who was visiting the town with Henley Symphony Orchestra. Mrs Whittaker, who chairs the orchestra, said: “We went into the print room where he instructed them to print this parchment.

“What is important is that it celebrates the twinning arrangement.”

Henley was officially twinned with Bled in 2013.

Members of the orchestra visited Bled as part of the town’s 22nd annual international music festival last month. Mrs Whittaker said: “We particularly enjoyed being able to perform in their festival hall, which had very good acoustics and was very comfortable for us.

“It makes it a hat-trick of twinned towns we have now been to and the facilities have all been excellent. It’s a bit of a contrast to what we have here!”