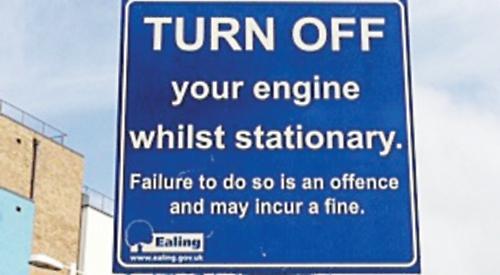 DRIVERS should be told to switch off their engines while waiting in traffic in Henley, says a former highways chief.

David Nimmo Smith says the move would help tackle air pollution in the town, where in some streets the level of nitrogen dioxide is 50 per cent higher than Air Quality England’s target limit of 40 micrograms per cubic metre.

Councillor Nimmo Smith, a town councillor and former cabinet member for environment on Oxfordshire County Council, wants signs installed at junctions in the town centre warning drivers that if they fail to turn off their engines they may receive a fine. A similar scheme operates in Ealing in West London. Cllr Nimmo Smith said the signs could be part of a wider air quality management plan. Drivers would know they had to obey in the same way that they recognised speed limit signs.

“The signs would also help make people aware of the problem,” he said. “It could be argued that it wouldn’t make much of a difference but if it is part of a plan, part of a greater haul of ideas, then it could have an impact.”

Cllr Nimmo Smith said that before he lost his seat at the county council elections in May, a review of street furniture, including road signs, was due to take place.

He has written to Henley’s new county councillor Stefan Gawrysiak asking if he has raised the issues with his fellow members and officers.

“Henley is not the only town to have air quality problems,” said Cllr Nimmo Smith. “I know there are issues in Chipping Norton and also in the centre of Oxford. They haven’t really come up with an answer but putting up some signs might be.

“I don’t know how many teeth the signs in Ealing have but I should think, if there is a fine, that it is commensurate with what people expect and not seen as draconian. If it is on par with, for instance, speeding fines, then people would be more likely to accept it.”

He said the Henley scheme could be policed by community support officers on an “ad hoc” basis, targeting problem areas.

Councillor Gawrysiak says the idea of a Kill your Engine campaign was among the proposals being put forward by the Henley transport strategy group to South Oxfordshire District Council, which is responsible for tackling air pollution.

He said: “The group has come up with lots of measures to do with heavy goods vehicles, air quality and particulate monitoring. I am hugely supportive of any campaign that will have an effect on reducing air pollution in Henley, such as Kill your Engine.”

He said he would pursue the ideas with both councils.