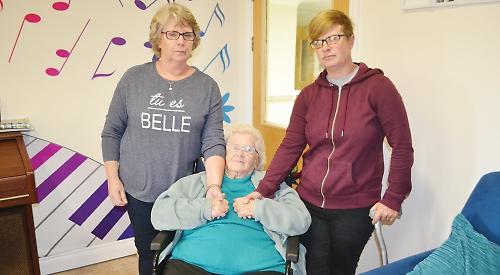 A DISABLED pensioner has been left feeling isolated and lonely after being moved into care 20 miles away from her family in Henley.

Betty Thatcher, 85, had been living in Gainsborough Crescent for more than 30 years when she was moved to The Meadows care home in Didcot in March as she was struggling to look after herself and needed 24-hour care.

Her family say they were told the move would be for only a few weeks but she has now been away seven months, which they claim is bad for her health and is putting a strain on them because of the travelling and worry.

Now they are appealing to Oxfordshire County Council, which is responsible for adult and social care, to have her admitted to a care home in Henley.

Her daughter Emma Thatcher, 47, said: “If she was being cared for in Henley she would be happy and I’m sure it would prolong her life. Her friends and family would be able to see her. She is lonely and feels isolated because she is so far away.

“We have no qualms about the quality of the care she is getting, but you can see this is playing on her mind. She gets very low.”

Mrs Thatcher, who has lived in Henley all her life, said: “You don’t realise how much you appreciate living in the town. You think it may be nice to get away for a time but I have missed it terribly. It has been difficult to be away.

“I was told I would have to go for a few weeks, perhaps a couple of months, and I would be put on a waiting list for Henley. I feel they’ve forgotten about me.”

Mrs Thatcher, who was a dinner lady at Valley Road Primary School for 21 years, struggles to walk due to pain in her hips from operations many years ago. She also suffers from arthritis.

She had been using a frame for a number of years but is now wheelchair-bound.

In October last year she went for a temporary stay at the Sanctuary care home in Hill Road, Watlington, for a few weeks.

She then spent several weeks in the run-up to Christmas with her family but returned to the home in Watlington in the new year when doctors suggested it was best she went into care permanently.

Mrs Thatcher was moved to the Didcot care home as there was no room at the Chilterns Court care centre in Henley, which is part of the new £16million Townlands Memorial Hospital “health campus” in York Road. Both are run by the Orders of St John Care Trust.

Since then she has been on a waiting list for the Henley home but any vacancies to arise have been filled by people deemed to have more immediate needs. Miss Thatcher, an army veteran who lives in County Durham, said: “Mum was sceptical about moving and was umming and ahhing but she could not live at home anymore and needed the care.

“We were told there were no beds available at Henley at the time and she would need to go to Didcot, where beds were available, for a very short period of time and then she could come to Henley when there was a space.

“We were told it would be a few weeks and that if she did not go to Didcot she would not be on the list to go into the care home in Henley, so we agreed.

“Mum agreed to go because she thought it would be a short-term thing for a couple of weeks but now we’re seven months down the line.”

Miss Thatcher has kept in touch with the adult social care team in the hope of a space at Chilterns Court becoming available.

A few weeks ago she was told her mother was next in line but then was told she had been moved back down the list.

Miss Thatcher said: “We were told she was fifth on the list, then fourth, then fifth again. At one point she was first and we thought ‘great, she is going to be back on the move’. Then I found out she had been dropped down again.

“The reason given is there is someone of higher priority with a more immediate need for a bed in Henley.”

Mrs Thatcher’s other children, Kim Bradley and David Thatcher, who both live in Henley, have been making the 40-mile round trip to see her three times a week between them.

They say their mother is getting down as even family members are finding it difficult to find visit her.

Mrs Bradley, 63, of King James Way, visits twice a week and helps her mother with washing as well as taking her out and to hospital and doctor appointments.

She said: “We never expected them to be able to solve the situation immediately but thought she would be able to take a space when it became available.

“When we told her she was top of the list she was talking about how she could see people she knows. I was choked when she moved back down the list.

“I have noticed in the last couple of months there have been times when she was tearful.”

Mr Thatcher, 65, of Gainsborough Crescent, said: “The social care people said she would be in there for a matter of weeks.

“She started quite low down the list and has been moving up. It was reported to us she was next in line for a place in Henley but now she has obviously been moved back down the list.

“The problem for us is the running about. We can’t get over to see her as often as we would like. My sister goes to see her every couple of days but the petrol costs are becoming a problem.

“It’s such a shame that local people can’t get a chance to use these facilities. She has lived in the town all her life. This is her home and she is part of the community.”

Miss Thatcher, who calls her mother most days on a mobile phone that Mrs Bradley bought for her, said that if she was being cared for in Henley, she would have daily visits from her family, friends and neighbours.

She said: “When she lived by herself she would talk to her neighbours on Gainsborough. Her family could take her into town and there would be people to talk to within yards of her home. Now she is not getting any interaction with her friends.

“My mother is proud and does not like to moan or make an issue but I know by the tone of her voice she feels she is being forgotten about.

“Mum would a lot more happy if she was back in Henley where she would have regular visitors and knows people who are there. She is very aware she is not seeing anybody.”

Mrs Thatcher said the staff at the Meadows were “wonderful” but she wanted to go home.

She said: “I have friends who can’t get here to see me. It would mean my family could visit more regularly.

“I feel like I’ve been forgotten about and they are not going to do anything about it. The girls have been taking it up with them.

“I’ve found it frustrating and it does make me feel tearful and a bit depressed. When I was at home my family would take me out but I can’t do that here. I just want to know what’s going on and whether I’m going to be helped.”

A county council spokesman said: “The particular care home in question in Henley has not had a vacancy for a number of months.

“We remain very much aware of the family’s desire for Betty to move to Chilterns Court and when this becomes possible it will be facilitated.”