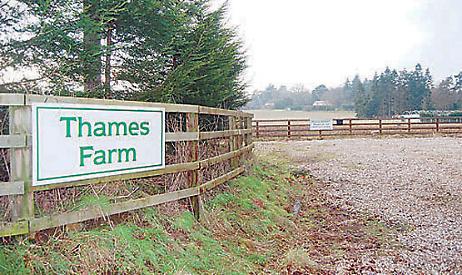 RESIDENTS of Shiplake fear their village could become a suburb of Henley after failing to stop 95 homes being built on land between the two.

A High Court judge has refused to review a planning inspector’s decision to allow Claire Engbers, the owner of Thames Farm, off Reading Road, to develop the site.

South Oxfordshire District Council, the planning authority, and Shiplake Parish Council had both sought a judicial review after inspector John Braithwaite granted her appeal against the refusal of planning permission.

Mr Braithwaite, who presided over a public inquiry in the summer, said the district council had failed to secure enough housing land to meet demand for the next three years, which invalidated its local plan. The district council argued that the inspector had used the wrong method to calculate his figures and that it had in fact have a three-year supply.

But the Honourable Mrs Justice Lang, of the Queen’s Bench Division, said Mr Braithwaite’s method was a matter for his judgement and that other inspectors had used the same one in other appeals.

She said it could not be argued that his conclusion was unlawful. “The inspector formed the view that there were material considerations justifying a departure from the development plan,” she said. “It was based on findings of fact and an exercise of judgement.”

Mrs Justice Lang ordered the district council to pay £5,780 in legal costs to the Secretary of State for Communities and Local Government, which had defended the case.

The council says it will seek permission to re-apply for a judicial review.

Councillor Paul Harrison, who represents Shiplake on the district council, said a “huge mistake” had been made by the inspector and the court had supported it.

“The danger is that Shiplake becomes just a suburb of Henley and the green space surrounding the two is eroded,” he said.

“We’re already looking at the potential development of the old Wyevale garden centre site next door, which would bring them closer together.

It’s going to create even more traffic on Reading Road and worsen air pollution in Henley. There’s also the road safety issue as cars often speed past that site.”

He claimed the judgement could set a precedent that would allow developers to successfully challenge other neighbourhood plans.

Cllr Harrison said: “It’s unfortunate that neighbourhood plans, which the community voted on, can just be tossed aside in the drive to push through housing at any cost.

“There’s so much pressure to build that inspectors keep re-interpreting things and it’s hard for planning authorities to oppose them.

“We all thought we were safe when the land supply limit was reduced to three years but that has been undermined and there’s no sense of security or consistency.”

Tudor Taylor, chairman of Shiplake Parish Council, said: “This is an absolute disappointment which puts a big question mark over the validity of all neighbourhood plans in South Oxfordshire.

“I would urge Henley MP John Howell and the politicians to do something about it. You can’t claim to support localism and encourage people to make neighbourhood plans only for them to be effectively rejected.

“This was allowed through on such a small margin and it doesn’t resolve the three-year land supply issue. If another site elsewhere in the district falls through, we could fall short overall and once again struggle to defend ourselves.

“It has created massive doubt and uncertainty but we’re still going ahead with our neighbourhood plan because what other choice do we have? We would have no protection without it.”

She originally sought consent for 110 units in 2013 but this application was rejected by both the district council and a planning inspector before a High Court judge overturned the inspector’s ruling, clearing the way for a new appeal.

Mrs Engbers submitted a smaller, “greener” scheme while that legal battle took place and the district council rejected it, citing road safety concerns and the fact that Thames Farm is not in the joint Henley and Harpsden neighbourhood plan.

This went against the advice of planning officers, who said the council didn’t have enough land to meet the next five years’ demand so the neighbourhood plan held no weight. In overturning that decision, Mr Braithwaite said the council had only enough land for the next 2.998 years, which invalidated the plan despite the Government reducing the limit from five years to three.

He said the council’s claim of a 3.9-year land supply was based on excessively optimistic assumptions about how quickly new homes could be built after receiving planning permission.

In its application for a judicial review, the council said Mr Braithwaite had failed to consider the impact of the development on the character and appearance of its surroundings.

Councillor David Bartholomew, who represents Shiplake on Oxfordshire County Council, said: “Villagers are going to be bitterly disappointed as more than 600 signed a petition calling for a judicial review. Every level of local democracy was against the development yet it still got through.

“The marginal housing land shortage was given an absurd amount of weight when I’d put it down to a statistical error.

“However, the approval of Thames Farm does restore the district’s three-year supply and that will hopefully make Shiplake’s emerging neighbourhood plan more robust.”

Kester George, chairman of Harpsden Parish Council, said: “My reaction is one of sadness but not surprise as I felt the district council’s application didn’t capture the essence of the case, though perhaps they were limited by the law.

“I can only say we did our best but the law has made an ass of neighbourhood planning and shown it to be weak. The whole thing seems to be going wrong and it’s most disagreeable.

“It’s an absurd situation but there’s not much we can do until those in power change the law.”

John Cotton, leader of the district council, said he was “disappointed” but added: “We have the right to renew our application and to present our case for this at a hearing, which we shall do.”

Mr Howell said: “The court has made an initial assessment but the district council can renew its claim and should do so as it’s clearly wrong to base an entire planning judgment on the absence of just one or two houses.

“Communities preparing neighbouringhood plans should continue as normal. This is not a question of whether the plans have validity but whether the district council has a three-year housing supply.”

Mrs Engbers said: “It is noted with much regret that the district council is requesting an oral review of the High Court’s decision, which will incur substantial additional costs for all parties.

“The planning consent awarded is in line with government policy to increase the number of new and affordable homes being built.”