School to stay open after improving with new head 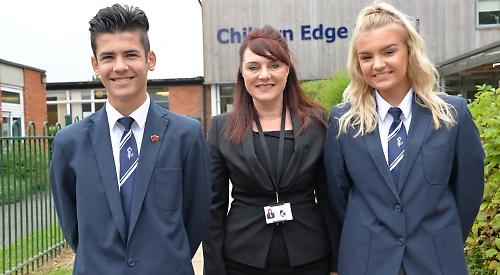 CHILTERN Edge School is set to stay open after an independent inspector said it was “improving” under a new headteacher.

The secondary in Sonning Common has been in special measures since April after being rated “inadequate” by Ofsted and Oxfordshire County Council, the education authority, considered closing it.

Now the council is expected to remove the threat of closure following an inspection carried out over two days last month by David Bray, of Learning Effectively School Improvement and Support Services.

He reviewed how the Reades Lane school was addressing the weaknesses identified in the Oftsed report, including poor progress by pupils in the core subjects, lack of support for disadvantaged pupils and poor senior leadership.

Mr Bray found the school had improved both the quality of teaching and outcomes for pupils under new headteacher Moira Green, who was appointed in May.

Lucy Butler, director of children’s services at the council, has recommended the closure threat is removed by the council’s cabinet when it meets on Tuesday.

She said: “The review provides confidence that senior leaders of the school have the capability and capacity to sustain the continued improvement required to secure good outcomes for its pupils.

“It is now important to make clear the future of the school in order to secure further improvement.” She said Mrs Green had, crucially, submitted a balanced budget for 2017/18 while a staffing restructure would help reduce the school’s deficit of £561,256 over the next few years.

“On the deadline for on-time applications for 2018, Chiltern Edge had received fewer applications from Oxfordshire families than in 2017, despite there being slightly more primary pupils in the corresponding transfer cohort.”

She said only 12 people from Oxfordshire had chosen Chiltern Edge as their first preference for next year, compared with 172 for Gillotts School in Henley and 114 for Langtree School in Woodcote.

However, a large proportion of the school’s pupils came from Reading, where the borough council had advised that from 2019 it estimated an increase in the number of pupils by 40 to 60 per year.

At present, there are about 90 children in each year group.

In a letter to parents this week, Ms Green said: “It is important to recognise the monumental efforts of staff to bring about the changes necessary to secure improvement. Their hard work and dedication cannot be underestimated. We know that there is still much to do and we are committed to working together to ensure that the school returns to ‘good’ and continues to thrive.”

He described the school as “fragile” due to the extensive changes that had been made and identified disadvantaged and special educational needs students as a priority.

Mr Bray said pupils’ behaviour had improved since September, although there had been more exclusions.

This summer’s GCSE results had also shown improvements from 2016.

He said: “The 2017 Key Stage 4 examination results represented a considerable improvement when compared with 2016. Almost all groups of pupils did better, especially in English and mathematics.

“Interventions used to provide additional support, for example, through a ‘Saturday school’, are helping current year 11 pupils to catch up with gaps in their learning.

“However, improving the attainment and progress made by disadvantaged pupils remains a priority. Progress in science is still too weak.

“The school is still at a relatively early stage of developing its monitoring of progress across a wider range of subjects and year groups.”

Ms Butler said discussions were continuing with the Maiden Erlegh Trust, a multi-academy trust based in Wokingham, about becoming Chiltern Edge’s academy sponsor.

Conversion to an academy is required by law as the school was put into special measures and a proposal has been submitted to the Department for Education.

Henley MP John Howell said: “Above all, I would like to praise and thank everyone for the enormous amount of hard work that has gone into improving the school.

“I would like to thank all those from the community and from the school who have worked hard to try to save the school.

“The effort that has been put in has been tremendous and it is good that they have won.

“My thanks also go to Moira Green, for bringing the school out of a deficit situation.

“I hope the county council will accept these recommendations and ensure that the school flourishes.”

Reading East MP Matt Rodda said: “Chiltern Edge is a much-loved local school, which is improving under an impressive new head and students and staff are working hard to achieve outstanding results.

“I now call on Oxfordshire to give the school a guarantee that it will remain open for good, so that it can flourish as an outstanding local community school, putting residents in Caversham and Emmer Green at ease, so that they know Chiltern Edge will be there for them and their families.”