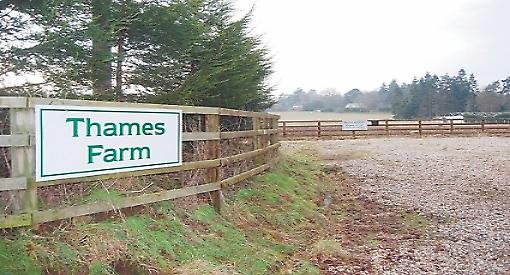 TWO councils have been urged to give up the fight after losing their latest bid to prevent 95 homes from being built on land between Henley and Shiplake.

A High Court judge has once again refused to review a planning inspector’s decision to allow the development of Thames Farm, off Reading Road.

It was the second time in a month that South Oxfordshire District Council, the planning authority, and Shiplake Parish Council were denied the right to a judicial review of the decision by John Braithwaite to grant landowner Claire Engbers’s appeal against the refusal of planning permission.

Both councils appealed against the judge’s previous decision at a High Court hearing in London on Friday but were told this week that they had been unsuccessful.

Mr Braithwaite, who presided over a public inquiry in the summer, approved the development, saying the district council hadn’t secured enough housing land to meet the next three years’ demand.

Under Government guidelines this invalidates both its local plan and the joint Henley and Harpsden neighbourhood plan, which doesn’t earmark the 14-acre site in Harpsden parish for development.

Both councils argued the inspector had used the wrong method to calculate his figures and that the district council did, in fact, have enough land but the High Court said Mr Braithwaite’s method was a matter for his personal judgement.

The second appeal was rejected on similar grounds.

The district council must pay undisclosed legal costs to the Department for Communities and Local Government, which defended the case, in addition to the £5,780 it paid last time.

It has until Tuesday to decide whether to take the case to the Court of Appeal but there is mounting concern about the cost to the taxpayer.

Councillor Paul Harrison, who represents Shiplake on the district council, said he believed the inspector had made a “huge mistake” but the battle was becoming increasingly futile.

He said that since the Thames Farm hearing there had been two other appeals where inspectors had accepted the district had more than three years’ housing land so the council no longer needed to fight for the integrity of neighbourhood plans.

Cllr Harrison said: “Shiplake Parish Council should definitely stop and not waste any more public money. It’s slightly different for the district as they’ll have to consider the chances of winning.

“They’ll also have to decide whether the benefit of winning would even justify the outlay because they have to consider the needs of the whole district, not just one community.

“It looks like Thames Farm will go ahead. I won’t have a part in that decision but the inspector’s verdict no longer sets a precedent and the prospect of success is so slim that there’s very little reason to continue.” David Bartholomew, who represents Shiplake on Oxfordshire County Council, said: “It’s for the district council to decide its next steps but it’s a pretty fine line because it’s been refused so many times before and going to the Court of Appeal is going to be very expensive.

“If it doesn’t proceed, it would then be a huge battle for the parish council to fight alone considering what has gone before.

“I still believe the decision to permit this grossly inappropriate development is a triumph of commerce over local democracy. We have fought hard but have been overpowered and I’m very disappointed.

“The Henley and Harpsden neighbourhood plan is effectively smashed as it failed to secure affordable housing at the old Jet garage site in Henley, it failed to prevent Henley’s old LA Fitness gym being turned into a care home and now this has happened.

“I just hope the neighbourhood plan committee can find the strength to fight any further breaches.”

Former Henley town councillor Dieter Hinke, who chaired the neighbourhood planning governance committee, said: “If the district council continues to pursue this, it will become expensive and I can’t believe they will stick their neck out like that.

“Anyone with a planning background could see there was nothing wrong with the inspector’s judgement and wondered why the councils were pursuing such an obviously unwinnable battle.

“This is a costly business for the taxpayer. There’s constant talk about times being hard and services being cut but public money is being thrown away on QCs and barristers.

“Whatever the district council may claim, it doesn’t have a three-year land supply and the inspector’s report was very thorough. The council may have won other appeals more recently but those were contested on different grounds.

Henley MP John Howell, who introduced neighbourhood planning as part of the 2011 Localism Act, said: “I am working with central Government to help determine this matter but we have to wait until the legal process has been concluded.

“The inspector’s decision also says a lot about the Planning Inspectorate’s lack of consistency and judgement and I am pursuing reform in my role as chairman of the backbench communities and local government committee.”

District council leader John Cotton said: “I have not yet read the judgement in depth. We will be discussing it fully within the next few days in order to decide our next steps.”

Mrs Engbers originally sought permission for 110 homes at Thames Farm, which the district council rejected in 2013. She went to the High Court to have this decision overturned.