Another appeal in Thames Farm saga 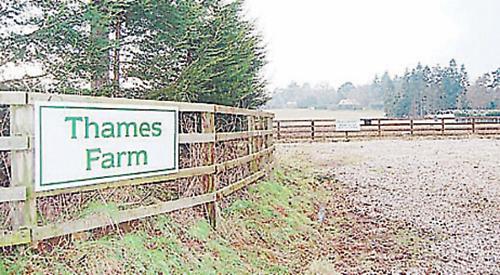 A FIGHT to prevent 95 homes being built on land between Henley and Shiplake has been escalated to the second-highest court in the country.

South Oxfordshire District Council, the planning authority, is to ask the Court of Appeal to overturn a planning inspector’s decision to permit the development at Thames Farm, off Reading Road.

Last month, the High Court twice refused the council’s requests for a judicial review and ordered it to pay costs to the Department for Communities and Local Government, which defended the case.

The council says its solicitors have advised that it could still win so it is escalating the fight. A hearing is expected to take place in the next weeks.

Claire Engbers, who owns the 14-acre site, first sought planning permission for 110 houses in 2013. That application became mired in legal wrangling but she submitted a smaller, “greener” scheme to the district council last year.

The council refused permission, against planning officers’ advice, saying the land in Harpsden parish wasn’t earmarked for development in the joint Henley and Harpsden neighbourhood plan and developing it would pose a road safety hazard.

Mrs Engbers appealed and planning inspector John Braithwaite overturned the council’s decision, saying it hadn’t secured enough housing land to meet the next three years’ demand and this made the neighbourhood plan invalid.

The council claimed Mr Braithwaite had miscalculated his figures but the High Court said his methods were a matter for his judgement.

Council leader John Cotton said: “We continue to believe that the legal arguments are in our favour and will continue to pursue them as far as is necessary.”

Paul Harrison, district councillor for Shiplake, said: “The council believes it has legitimate arguments and that the cost of pursuing this wouldn’t outweigh the benefits of defending its position.

“I was sceptical about continuing but we’ve spent more than half a million pounds promoting neighbourhood planning across the district and we can’t just have one inspector overturning it be saying ‘no, I’m going to calculate this in a different way’. We need a chance to have all the facts heard in public at a judicial review.”

Shiplake’s county councillor David Bartholomew said: “I’m delighted that the district council is pursuing the clearly expressed will of the majority of residents and upholding democracy in the face of commercial interests.

“Legal action is, sadly, costly, which often puts councils at a disadvantage compared with developers, but this is the right thing to do.”

Shiplake Parish Council also made two unsuccessful High Court bids for a judicial review but will not pursue the matter further due to the cost.

Chairman Tudor Taylor said: “It is brilliant news that the district council is going ahead with an appeal.”