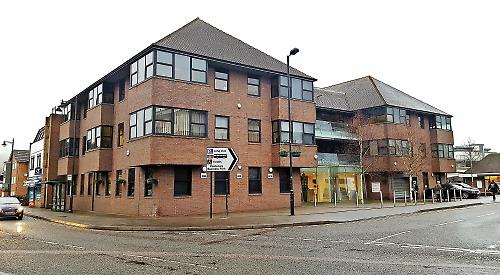 AN OFFICE complex in Henley town centre could be converted into flats.

Ressance of Newbury has applied for permission to redevelop The Hub at Hallmark House, off Station Road, into 23 flats, mostly with two bedrooms.

The developer does not need full planning consent as converting offices into homes is “permitted development” under a law introduced in 2013.

The three-storey complex, which was built in 1991 on land previously owned by British Rail, is owned by a management company in Portsmouth and divided into about a dozen suites.

These are occupied by a number of businesses, including science consultancy Quintessa, accountants HMT and software firms KitchenCUT, Dendrite Clinical Systems and New Star Networks.

The companies are aware of the proposals but would not comment when approached by the Henley Standard.

South Oxfordshire District Council, the planning authority, could only refuse permission if there was a risk of flooding or contamination on the site or if Oxfordshire County Council, the highways authority, believes there would be an adverse impact on traffic or road safety.

Furthermore, a developer with permitted rights does not have to make payments towards improving infrastructure such as roads, schools or GP surgeries or to include a proporation of “affordable” homes.

The site is not earmarked for development in the joint Henley and Harpsden neighbourhood plan, which names the sites where about 500 homes should be built to meet Government targets.

The plan says Henley should meet the needs of start-up and technological companies by “encouraging the provision of shared office space ‘hubs’ and service centres.”

It also backs the Henley town centre action plan, which says commercial premises should be retained rather than converted to residential use.

Stefan Gawrysiak, a town, district and county councillor, said Ressance’s proposals were “yet another blow” to the neighbourhood plan.

He said: “The problem is that the district council has to approve it and there’s no money coming in to offset the impact on the community. It also doesn’t have to include any affordable homes, which is absolutely shocking and goes against everything we set out to achieve in putting the plan together.

“As it stands, the neighbourhood plan provides enough homes to meet Henley’s future need and we need those existing offices to provide jobs much more than we need another 23 flats.”

Ken Arlett, chairman of Henley Town Council’s neighbourhood plan committee, said: “The one advantage is that those flats would be part of the final figure for Henley’s quota and I’m sure the district council will be pleased to see extra homes built.

“I’m not sure how well-used those units are, although if this is going to affect any businesses that does cause a problem.

“That’s the trouble with Government guidelines just granting planning permission on an ad-hoc basis. We used to say each application is considered on its own merits but that no longer appears to be the case.”

In 2016 the district council allowed the former Jet garage in Reading Road to be converted into 53 extra care flats for the elderly.

The site was originally earmarked for 55 regular units, 22 of which were to be affordable.