Residents concerned about congestion from 82 homes 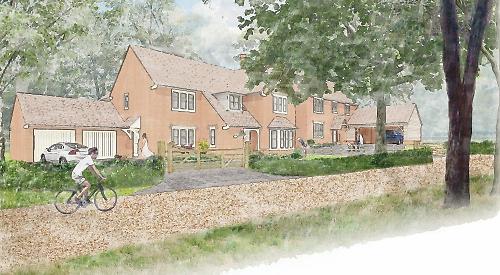 PLANS for a new housing estate in Henley have been unveiled.

Dozens of people attended a public exhibition at the town hall hosted by Thames Properties, which wants to build 82 homes in a field off Fair Mile.

The land is earmarked for 60 homes in the joint Henley and Harpsden neighbourhood plan.

However, the developer says demand for housing in South Oxfordshire has increased since the plan passed a referendum in 2016 and the site has increased in size from 3.8 hectares then to 4.3 following the purchase of  Field Cottage and the surrounding land from neighbour Simon Parsons.

Thames Properties wants to build 62 houses and 20 flats, with 40 per cent being “affordable” in line with South Oxfordshire District Council planning policy.

Access would be via a simple T-junction off Fair Mile and there would be a footpath and cycle link to Luker Avenue.

The development would be split into zones to blend in with its surroundings. Brick and flint cottages would go along the Fair Mile frontage while larger family homes would be set further back.

Visitors to the consultation on Wednesday last week were given a survey to fill out and Thames Properties says their feedback will shape its final proposal.

People expressed concerns about an increase in traffic on Fair Mile and the impact of the development on wildlife.

They also said the larger properties could spoil views of the Chilterns Area of Outstanding Natural Beauty, which lies immediately to the west of the site.

Henley Mayor Kellie Hinton said: “I share residents’ concerns about the environmental aspects. I know those aren’t unique to this site but it is next to the AONB so needs to be treated with great care.

“The other thing that people are asking is what will be done about any congestion. This is already a problematic area and people feel 82 new homes could make that worse.

“I’m also not sure whether we need that many larger properties. There have been other schemes where the developer has listened to feedback and increased the number of smaller houses, which may be appropriate in this case.

“I don’t think any of those matters are reasons to object at this stage but they do need to be worked on in partnership with the developer. However, if people aren’t satisfied at the end of that process then I won’t be able to support the proposal.”

A Thames Properties spokesman said: “Naturally, there have been some concerns but we will be looking at all feedback before finalising anything.

“It’s generally a very low-rise development and has been designed to be as attractive as possible.

“The site could be redeveloped into a sustainable residential scheme which would help to meet local housing need while delivering a range of important benefits for the area.”

Mr Parsons, who sold his plot for £2.6 million in 2016, was a member of the volunteer steering groups which put the neighbourhood plan together under Henley Town Council’s supervision.

The document is currently being revised and may have to find space for another 350 or so homes across the town.