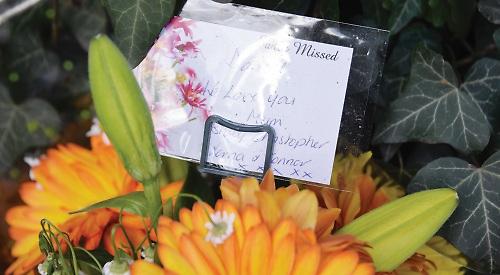 THE family of a Henley chef who was killed when he was hit by a gritting lorry have paid tribute to him.

Daniel James, 30, was struck by the vehicle as he walked along Marlow Road, close to the entrance to Swiss Farm, in the early hours of Saturday.

Police said he could have been by hit by a number of other vehicles.

Mr James, who was also known as “Kermit” or “Kerm” to friends, only moved to Henley two weeks ago when he started work at the Bull on Bell Street pub.

He had previously worked at pubs and restaurants in Bracknell, where he grew up with his mother Linda Wellsteed, brothers, Chris and Ashley and sister Lorna.

In a statement, the family said: “It is with deep sadness that a much- loved son and brother has passed away. Born and raised in Bracknell, he had many friends and touched the hearts of many more. Although Daniel faced many challenges due to his autism spectrum disorder, he led a full and colourful life, possessed many special qualities that made him unique and a loving family that supported him in everything he did.”

Ashley wrote on Facebook: “This world will not be the same without him. Always thinking of you, brother, and going to miss you. Love you, man.”

Several bouquets of flowers have been left at the crash scene, including one from his family with a message reading: “Daniel, we love you, Mum, Ashley, Christopher, Lorna and Connor xxxxx”.

Police were called to the scene at 5.30am on Saturday. Officers closed the road and placed a cordon from Swiss Farm to Fawley Court, so drivers were forced to find alternative routes.

A canopy was erected in the road and Mr James was pronounced dead at the scene.

The gritter, which was being operated by Skanska, Oxfordshire County Council’s highways contractor, was kept inside the cordon together with a Grundon lorry.

The waste management firm said its driver arrived at the scene after the accident and used the vehicle to block the road from oncoming traffic.

The road remained closed until about 7pm on Saturday while the police gathered evidence.

There were more than a dozen police vehicles at the the scene, including a forensics van, and some officers were working out of a room at Swiss Farm.

Police are appealing for witnesses to come forward.

A spokesman for the county council and Skanska said they were co-operating with the police investigation and couldn’t comment further.

A Grundon spokesman said: “A Grundon vehicle arrived at the scene some time after the initial incident at which point the police were notified and our driver co-operated by blocking the road with his vehicle.

“All our thoughts are with the family and friends of the deceased man.”

The Brakspear pub has set up an online donation page to help pay for Mr James’s funeral.

General manager Dean Bigley said: “We are all saddened by Daniel’s death at the age of just 30.

“Daniel started work as a chef de partie at the Bull two weeks ago, having just moved to Henley from Bracknell to take up this new role.

“Despite only working with us for a short time, Daniel had made a great impression. He was a friendly young man with a good sense of humour and he got on well with the rest of the team here.

“He had a great passion for food and was full of enthusiasm for his work with a positive attitude that made working alongside him a pleasure. Our thoughts are with Daniel’s family at this sad time.”

Tom Davies, chief executive of Brakspear, said: “We know Daniel had made an excellent start at the Bull and impressed the team there and it is a tragedy that his promising career as a chef has ended so sadly. We have Daniel’s family in our thoughts at this difficult time and are contributing to the funeral costs.”

Some of Mr James’s friends have paid tribute to him online. Kyran Hicks said: “Known you over 25 years. RIP bro.”

Holly McKnight said: “Nothing can prepare you for news like this. You were so loved, Kerm. You were taken far too soon and you will never be forgotten.”

Police want to speak to any drivers who went along the road between 5.15am and 5.45am on Saturday.  Anyone with information should call 101 and quote reference 269 (17/3).