Boat festival helped to stay afloat with £2,500 from council 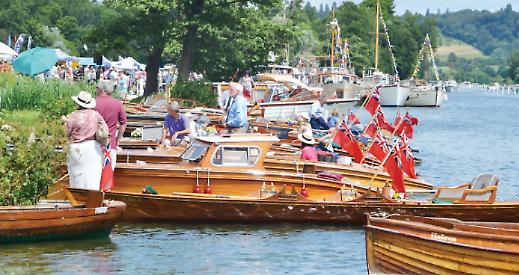 HENLEY Town Council is set to give £2,500 towards the cost of this year’s Thames Traditional Boat Festival.

Organiser Lady McAlpine, of Fawley Hill, applied for the grant earlier this year and councillors were initially divided on whether to approve it.

Now they have agreed to support the event after Lady McAlpine cleared up confusion over the event’s accounts which appeared to show it had savings of £41,000.

In a statement to the council’s finance strategy and management committee, she said the accounts were out of date as the festival’s accountant had left and her husband Sir William McAlpine had been seriously ill before his death in March.

In fact, the festival had £14,500 in the bank with funding pledged by the Shanly Foundation and sponsorship expected for the appearance at the event of the Royal row barge Gloriana. Lady McAlpine said she hoped the event would make at least £25,000 in ticket sales.

She said that next month’s three-day festival would cost more than £30,000 to stage, including £2,800 to hire Fawley Meadows for the week from Henley Royal Regatta.

Lady McAlpine said the festival committee always faced the risk of a significant loss if the event had to be cancelled if the site was flooded, as happened in 2015, the year she became involved.

She said there was no money then, adding: “Rebuilding has been very hard work and, while we were not complacent at the end of last year, we did feel we had more security. Frankly, if we had to cancel this year it would perhaps be the end of the ‘Trad’ as I can’t keep going forever and so far have found no one prepared to take it on.

“The committee is dwindling with just six volunteers to put on the whole event.

“I do realise that council money must be used sensibly but do feel so strongly that this is a Henley event, held in Henley, which offers a great weekend’s entertainment for all ages and tastes.”

This year’s festival, which marks the 40th anniversary of its launch as the Thames Traditional Boat Rally, will take place from Friday to Sunday, July 20 to 22.

There will be more than 200 craft, ranging from coracles and canoes to military and amphibious models, Edwardian steam launches and a flotilla of Dunkirk Little Ships. There will also be an appearance by Blue Bird K3, Sir Malcolm Campbell’s powerboat which set three water speed records in the Thirties.

Lady McAlpine said: “We know it brings families into the town in a rather more congenial way than the regatta and when I advertise Blue Bird’s presence the numbers will probably soar.

“Many will watch from the bridge or the other bank then go into town for food and drink.

“If there is any money in the pot, I really do feel it would be well spent.”

Councillor Ian Reissmann said: “My only concern is that we’re generally supportive of festivals getting off the ground in their early years but prefer not to provide indefinite support to keep them going.

“Hopefully, it will become self-sufficient and not continue to depend on us.”

Councillor Jane Smewing, who chairs the committee, said: “Perhaps we should feed that comment back to them as they’ve had three years’ worth of funding and it seems very successful so it would be very positive if it could become independent.”